Each year when Medicare’s Trustees report comes out, as it will soon, pundits and politicians fixate on the projection of when Medicare funding will be eclipsed by Medicare spending. But that target represents only one aspect of this $650 billion dollar social insurance program that protects 56 million people. Don’t we also need to know who pays for Medicare? What the taxpayer burden is and how much program participants pay? Whether we can afford Medicare as the U.S. population ages?

These are complex questions that we have tried to put in a fresh light in a series of papers. Four basic findings stand out and should color policymakers’ thinking about whether Medicare is working.

Recipients are footing the bill for a substantial chunk of program costs and their share of the total is rising.  In 2015, Medicare cost $12,174 per recipient. Beneficiaries bear just under one third of this burden and taxpayers just over two thirds. Add in deductibles and co-pays and the elderly’s burden goes up to 42 percent.

This already sizable share will rise because more older adults are remaining on the job and paying more in income and payroll taxes.

Taxpayers’ Medicare burden over time is bearable. It’s easy to get a scary and wrong answer to this question by focusing on the shrinking number of workers per Medicare beneficiary. From 1980 to 2000, the ratio was stable at about 4.  Now there are 3.2, and this ratio will fall to about 2.4 in 2030.  But payroll taxes aren’t the major funding source for Medicare, and a simple ratio like this says nothing about what resources might be available over time, never mind those continuing contributions of seniors still paying taxes.

A better way to gauge financial burden is to estimate taxpayers’ contributions compared to their financial resources. In 2015, the amount of taxes came to $2,334 per person aged 20 to 64. Annual GDP per capita for adults—a good proxy for living standards—totaled $75,277. If you deduct the amount that young adults annually pay for Medicare, that leaves $72,943. And this burden as a share of resources will rise only slowly over time.  It does not expand dramatically. Nor does it lower living standards for the young, as some have claimed.

Medicare’s lifetime value isn’t out of kilter with its costs.  Many experts can’t resist toting up how much Americans pay in to Medicare and how much they get out, implicitly arguing that we all should break even. But this misrepresents why legislators created Medicare in 1966—to protect older people who might otherwise find healthcare unaffordable and go without. Medicare is insurance, not an investment program.

Not only can this measure be misleading—many of the calculations are also wrong. Most estimates compare payroll taxes to total Medicare benefits.  But only about 40 percent of Medicare costs are covered by payroll taxes, which fund only Part A (hospital and skilled nursing stays but not, say, physician visits or prescription drugs). Comparing apples to apples then, it makes more sense to ask how much each Medicare recipient pays in payroll taxes relative to what each gets in Part A benefits. And, by the same token, it’s important to forecast Medicare costs using the specific consumer price index for healthcare rather than the general price index. Otherwise, individuals get blamed for health care inflation, which they cannot control.

These and a couple of other tweaks make for a lifetime value calculation that most of us can easily live with. Benefits come to $82,000 (in 2015 dollars) for a male turning 65 in 2030 and to $87,000 for a female. Contributions vary by wages so a low-wage worker will have paid $51,000 over his lifetime.  In contrast, a high- wage worker will have paid $104,000—more than the dollar value of benefits but not much. And this is exactly how Medicare was designed to operate—protecting lower income people.

Medicare is affordable if, as a society, we decide to pay a little more.  Medicare does face financing challenges as the population ages, and it’s in the interest of all Americans, young and old, to control its costs. But as another Trustee’s report triggers yet another round of debate over the program’s future, let’s give Medicare its due by dispelling the impression that beneficiaries aren’t paying much toward the costs of their own care or that the system is somehow malfunctioning if the sick and the poor get the most out of it.

The debate over Medicare’s future takes many forms. At its most basic, the issue is whether we can (or want to) afford Medicare. This series of issue briefs addresses key questions concerning the future of Medicare and how that will affect taxpayers and beneficiaries over time.
6 Jun 2016
News Release

A new series of papers by AIR reexamines a perennial policy question, particularly in an election season: Is Medicare sustainable? Led by Marilyn Moon, director of AIR’s Center on Aging and a former public trustee of the Social Security and Medicare trust funds, the papers conclude that several claims at the heart of most debates on Medicare’s future rest on faulty assumptions.
21 Sep 2012
Video

Medicare reform is a center-stage issue in the presidential campaign. In this video interview, Marilyn Moon, an Institute Fellow at AIR, explains why the issue matters and which features of the federal health insurance program for Americans ages 65 and older and the disabled most need to be addressed.

As Medicare celebrates 50 years since its signing into law by President Lyndon Johnson, experts look at the challenges facing the program today.  While cost and other reforms are foremost in many policymakers' minds, experts caution that reforms need to keep the program's intended beneficiaries i 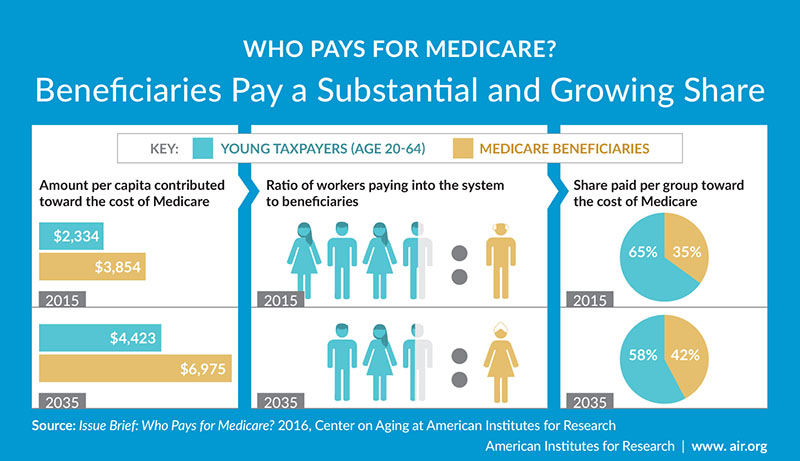 Who Pays for Medicare? Beneficiaries Pay a Substantial and Growing Share

This infographic illustrates key points from a series of papers by AIR, which reexamine the perennial policy question: Is Medicare sustainable? The papers, and the infographic, show that beneficiaries bear almost a third of the cost of Medicare, and that burden will rise as older adults increasingly stay on the job and continue to pay income and payroll taxes.