Washington, D.C. – Providing educators with additional feedback on their performance had a positive effect on student achievement in mathematics, but no statistically significant effect on reading/English language arts, finds a new study report examining the effects and implementation of a two-year intervention led by the American Institutes for Research (AIR) on behalf of the U.S. Department of Education’s Institute of Education Sciences (IES). 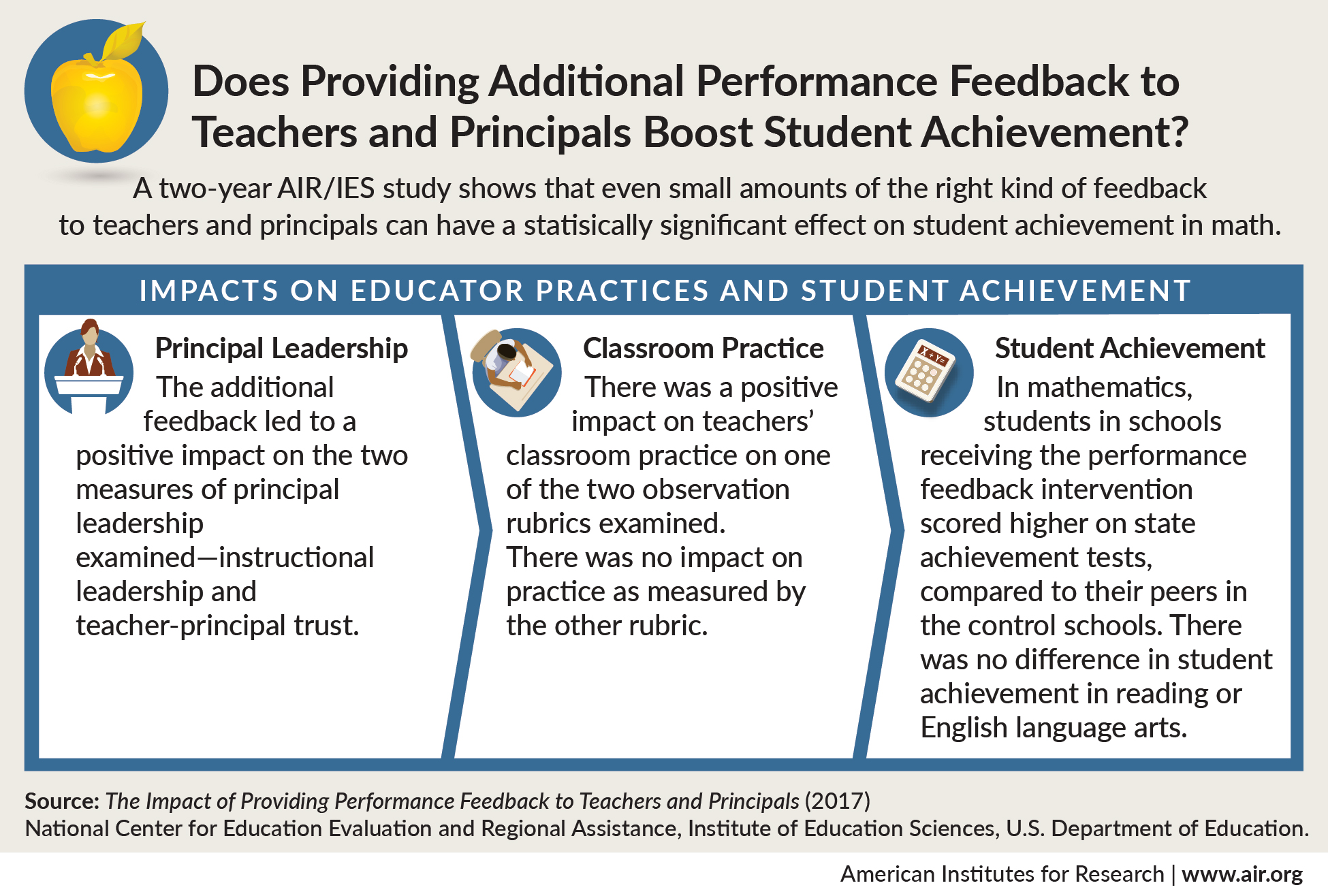 As part of the study, a group of elementary and middle schools in eight participating districts across five states were provided resources and support to implement three performance measures—classroom practice, student growth, and principal leadership—during the 2012–13 and 2013–14 school years. Within each district, schools were randomly assigned either to implement or not implement the performance measures. The measures were used to provide educators and their supervisors with information on their performance, but no formal “stakes” were attached to the feedback; for example, the results were not used by the study districts for staffing decisions.

“The information gleaned from these performance measures may help to identify educators who need support and indicate areas for improvement, leading to improved classroom practice and leadership and boosting student achievement,” said Mike Garet, AIR vice president and institute fellow, and the study’s principal investigator.

Findings on the study’s effect on teachers’ classroom practice, principal leadership, and student achievement include the following:

“It was surprising to find an effect on student mathematics performance in Year 1 given how little time it takes for those teachers to receive performance feedback,” commented Andrew Wayne, AIR managing researcher and the project’s director. “However, we do not know if the effects were driven by one, two, or all three types of feedback given to educators.”

This is the second and final report based on a study that IES conducted on the implementation of teacher and principal performance measures highlighted by recent research, as well as the effect of providing feedback based on these measures.

The study’s first report, Early Implementation Findings From a Study of Teacher and Principal Performance Measurement and Feedback, focused on the first year of implementation and described the characteristics of the educator performance measures and teachers’ and principals’ experiences with feedback. It was one of the few detailed descriptions of educator performance measures implemented on a large scale in districts.

Explore the report, The Impact of Providing Performance Feedback to Teachers and Principals, and accompanying blog at www.air.org.