Despite strides toward pay equity, a large earnings gap between men and women persists. According to the Council of Economic Advisers, in 2013 a woman working full time all year had median wages of just 78 cents for every dollar earned by a “median man” working full time year round. This gap narrowed from the 1970s through the 1990s, but, nationwide, has remained stuck at 76 to 78 cents since 2001.

For years, the Texas Higher Education Coordinating Board has been merging student level data with Unemployment Insurance wage data. Using these data, we report the median wages paid to men and women in 2014 to bachelor’s graduates in 10 large majors to see if there are gender differences in wages “controlling” for choice across high and low paying programs of study. These graduates completed their studies in 2013, so these are early career earnings—which is important since research shows that wage gaps often increase over time.

The table below shows the eight programs with the largest numbers of women graduates. Although the number of women graduates in Mechanical Engineering and Computer and Information Sciences is far smaller than in the “big eight” majors, we also include these technology-oriented high paying majors. 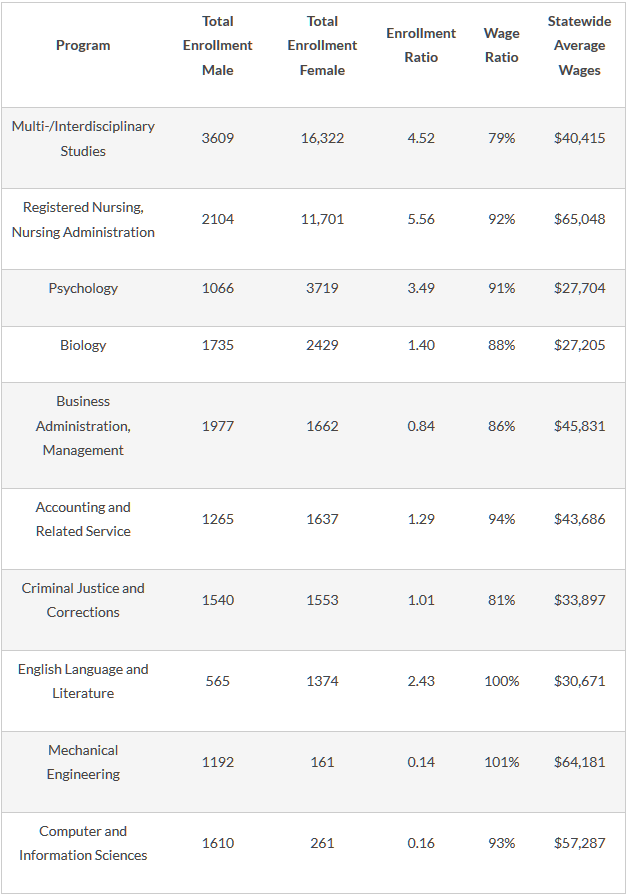 First the good news: Women don’t consistently flock to lower-paying majors compared to men. The two fields with the most women, Multi-/Interdisciplinary (the most common pathway into teaching in Texas) and Nursing, are above the median for all Texas bachelor’s graduates (around $33,500). But psychology and biology, the third and fourth fields ranked by the number of women graduates, are significantly below in median wages for all bachelor’s graduates. Of the remaining four large programs, only one—English—has wages lower than the statewide median. And, clearly, wages for Information Sciences and Mechanical Engineering graduates are far above the median.

Now the bad news: Wage parity among men and women is rare. Of these 10 majors, in only two (English and Mechanical Engineering) do women earn what men do and the number of women graduating in Mechanical Engineering is tiny compared to those in the big eight majors. Most likely, , their rarity and tech firms’ desire to have female engineers on staff likely drives up their wages. In contrast, the lowest wage ratio—with female graduates earning only 79% of what their male counterparts earn—is for Multi-/Interdisciplinary Studies, the major with the most women.

Clearly, more work needs to be done to sort out these patterns. Are regional differences at play? Are male and female graduates from the same programs picking different occupations? Within fields are women and men choosing different specialties? Are there differences, even immediately after graduation, in the number of hours worked? And so on.

Even with these unanswered questions in mind, the data speak volumes. Clearly, with few exceptions, women graduates have median wages significantly lower than their male peers who have graduated in the exact same field at the exact same time.

Mark Schneider is a vice president and an Institute Fellow at AIR. Jorge Klor de Alva is president of the Nexus Research and Policy Center.