Washington, D.C. – The U.S. ambassador to Nicaragua, Robert Callahan, took part in a school inauguration ceremony on March 11, 2010 in the small community of Kisalaya in Nicaragua. The structure is one of two schools that the American Institutes for Research (AIR) helped construct in the remote northern region of Nicaragua following Hurricane Felix in September 2007. USAID/Nicaragua Mission Director Sharon Carter and Alicia Slate of the USAID/Nicaragua Education Team also took part in the ceremony. 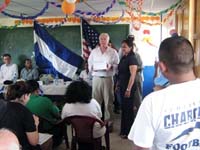 In November 2008, USAID/Nicaragua asked AIR to lead the construction of the two schools in the North Atlantic Autonomous Region of Nicaragua, along with providing other schools in the region with replacement books and educational materials damaged during the hurricane. The schools in Kisalaya and Santa Martha were constructed under the “build back better” concept, meaning the new structures are better than the original school buildings, and also serve as a refuge for the community in the event of another disaster. 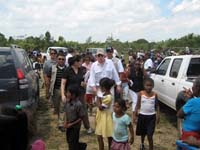 The new schools are equipped with multi-purpose community rooms, new latrines, rehabilitated wells, kitchens, and access to electricity. Kisalaya, which serves 565 students and does not have access to the electricity grid, is provided with electricity through solar panels.

The construction work was done within the framework of the EXCELENCIA project led by AIR. The objective of EXCELENCIA is to expand nationwide an enhanced educational model that promotes active teaching and community participation while incorporating the educational needs of indigenous peoples and ethnic communities.

About AIR
Established in 1946, with headquarters in Washington, D.C., the American Institutes for Research (AIR) is an independent, nonpartisan not-for-profit organization that conducts behavioral and social science research and delivers technical assistance both domestically and internationally in the areas of health, education, and workforce productivity. For more information, visit www.air.org.