Washington, D.C. – Early College High Schools (ECHS) enable students to earn their high school diploma and up to two years of college credits simultaneously, and research has shown that these programs have positive impacts on graduation rates as well as postsecondary enrollment and success.

A new, follow-up study by the American Institutes for Research (AIR) finds that those positive impacts continue years after students complete high school.

“Our research shows that the positive impacts of Early College High Schools continue for several years beyond high school graduation,” said Kristina Zeiser, a senior researcher at AIR and director of the study. “By enrolling in and completing postsecondary education sooner than their peers, Early College students are able to fully enter the workforce more quickly and are more likely to increase their lifetime earnings potential.”

While an earlier study of ECHS in North Carolina also showed positive ECHS impacts on short-term college enrollment and degree completion outcomes, the AIR study is the first to assess impacts on longer-term student outcomes based on a large sample of students from multiple states.

Dual enrollment programs, including ECHS, have grown significantly in recent years as states and school districts seek to provide all students with access to an education that prepares them for success after high school graduation.

“While our research focuses on a limited number of schools, Early College programs are growing across the country,” said Zeiser, who co-authored the study report with Mengli Song, a principal researcher at AIR and the principal investigator of the study. “This study, combined with previous research, can help policymakers and education leaders make informed, evidence-based decisions about their investments.”

This study was funded through a grant from the Institute of Education Sciences, the independent research and statistics arm of the U.S. Department of Education.

This follow-up study builds on previous research conducted by AIR, funded by the Bill & Melinda Gates Foundation, which focused on 10 ECHS that were operating in 2007 in five states (North Carolina, Ohio, South Carolina, Texas and Utah). High school, postsecondary and other data were gathered on more than 2,400 students, all of whom participated in admission lotteries to attend one of the 10 ECHS programs. Students who won the lotteries and were offered admission (ECHS students) were in the treatment group and those who were not offered admission were in the control group.

The follow-up study gathered and analyzed up to four additional years of postsecondary data on the participants in the previous evaluation.

Within six years of expected high school graduation, about 84 percent of ECHS students had enrolled in postsecondary education, compared to 77 percent of the control students. Nearly two-thirds of ECHS students (66 percent) had enrolled in two-year colleges, compared to less than half (47 percent) of students in the control group. Both differences between the two study groups were statistically significant.

Enrollment in four-year colleges within six years of expected high school graduation, however, was not significantly different between the study groups (58 percent for ECHS students and 57 percent for control students).

There were significant differences in degree attainment between the two groups of students. ECHS students were significantly more likely to obtain a postsecondary degree than their non-ECHS peers. For instance, within six years of expected high school graduation, the following were observed:

View the full report on air.org. 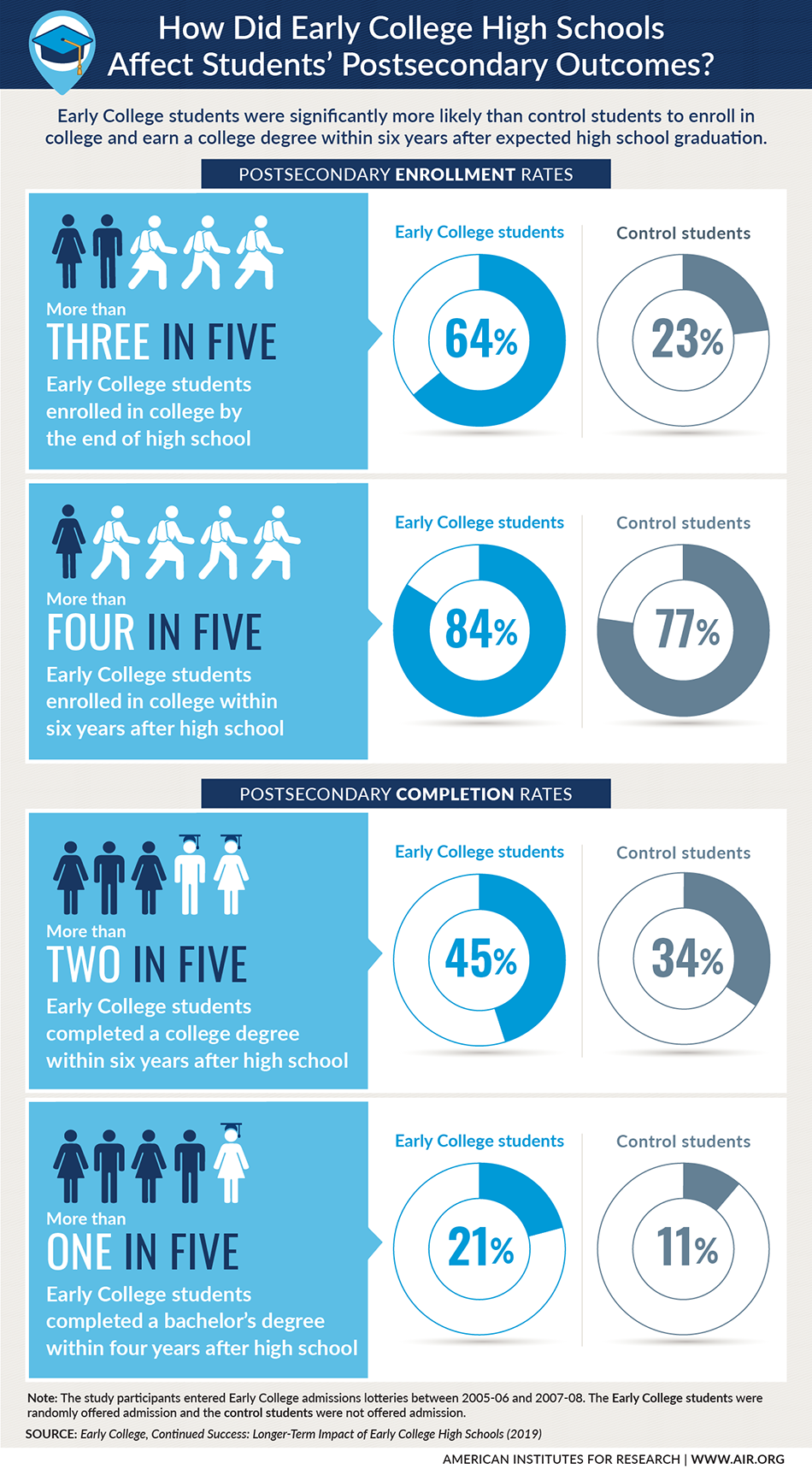