Despite Federal Efforts to Aid Employment of People with Disabilities, Labor Participation Has Dropped or Remained Stagnant, AIR Study Finds

Tables Break Down Data According to State, Type of Disability

Washington, D.C. – The proportion of working-age people with disabilities who are in the labor force fell from 25 percent in 2001 to 16 percent in 2014, according to a new brief from the American Institutes for Research (AIR).

More broadly, among those able to work who are either employed or actively looking for jobs, the data for people with disabilities has remained stagnant or declined despite “the array of federal policies, executive orders, and incentive programs intended to increase the employment and employability of people with disabilities,” the study said, including the Americans with Disabilities Act, which turned 25 in July.

State by state, the paper breaks down the workforce participation of people with disabilities, according to disability type.

“One major issue we have identified is that federal policy tends to treat people with disabilities as a homogeneous group,” said Michelle Yin, a senior researcher at AIR and lead author of the study. “But they are not. Once we disaggregated the data by state and specific type of disability, a different picture emerged.”

The paper, “One Size Does Not Fit All: A New Look at the Labor Force Participation of People with Disabilities,” comes as millions of U.S. workers return from the Labor Day holiday. It offers a fresh look at the roughly 19 percent of Americans with disabilities, a population that has frequently withdrawn from the workforce. Over recent decades, people with disabilities have comprised over one-third of those who haven’t sought work or stopped trying to find it. Since the Great Recession, employment numbers for this demographic have not bounced back at the same rate as for people without disabilities, the study found.

Yin breaks down percentages of people with disabilities either employed or actively looking for work in all 50 states and the District of Columbia. The data is further disaggregated into four main disability types: cognitive, ambulatory, vision or hearing, and self-care—defined as physical or mental health disabilities that have lasted more than 6 months, making it difficult for people to handle basic needs. Using 2013 data from the U.S. Census Bureau’s annual American Community Survey, the brief found: 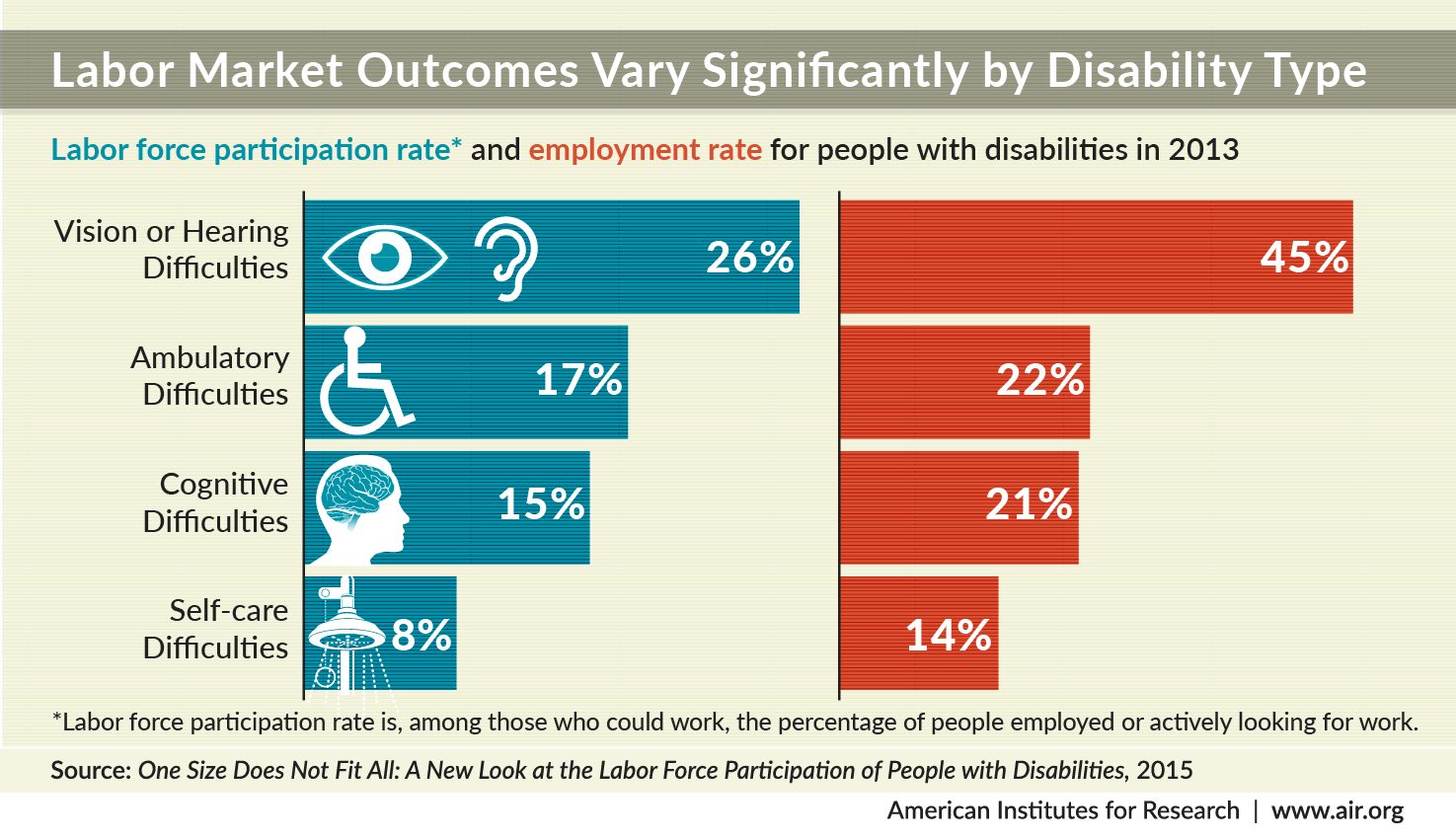 Dahlia Shaewitz, a principal researcher at AIR and co-author of the brief, noted that “federal policies and incentives do not offset what is also a matter of simple economics—jobs for people with a disability who are less educated will not provide long-term career advancement, adequate benefits or a living wage.” This reality adds urgency to the idea that federal policies toward people with disabilities should account for their specific circumstances.

“If anything, our study shows that there is a wide difference in labor participation among people with different types of disabilities,” Yin said. “But current legislation does not reflect those differences.”

“One Size Does Not Fit All: A New Look at the Labor Force Participation of People with Disabilities” can be found at www.air.org.