AIR Issues Paper Tracing the History of the Title I Program

Washington, D.C. – The American Institutes for Research (AIR) has released Title I at 50: A Retrospective, a paper that traces the history of the landmark federal program and provides background as Congress considers changes to that section of the Elementary and Secondary Education Act (ESEA).

“The overarching goal of the original Title I, and all subsequent versions, was to improve the educational opportunities and outcomes of disadvantaged students,” wrote AIR authors Andrea Boyle and Katelyn Lee.

“Although ESEA’s commitment to helping the nation’s most vulnerable students through Title I has held steady for half a century now, Title I’s structure has changed over time in response to policy debates and education reform movements. In particular, the federal role in education has evolved along with ways to address educational inequities for underserved students,” the authors found.

In 1965 President Lyndon Johnson signed into law ESEA, which established the Title I program to provide supplemental federal aid to local education agencies with high concentrations of students from low-income families in order to improve services for “educationally-deprived children.” Initially almost 9 million children were served, a figure that has grown to more than 21 million today.

The AIR authors briefly describe changes in the Title I program-- from its start 50 years ago to revisions made by the No Child Left Behind Act of 2001. Members of the U.S. Senate and U.S. House of Representatives are considering possible changes to the program as they deliberate reauthorization of ESEA.

Title I at 50: A Retrospective is available on the AIR website, and a blog about it appears on AIR’s Education Policy Center site. 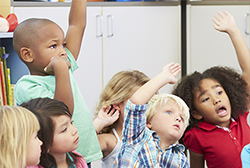 Title I at 50: Past, Present, and Future

This spotlight takes a look at the history of Title I, how the program has changed over time, and how it affects children, schools, families and education policy. Experts weigh in on the program's past and future in interviews, briefs, and blogs.
8 Jan 2009
News Release

Despite NCLB's increased focus on targeting federal resources to help students with the greatest needs, all federal education programs combined have not closed the funding gap between the highest- and lowest-poverty school districts around the country, according to a new analysis conducted by the American Institutes for Research (AIR) for the U.S. Department of Education. Overall, federal education funds were more strongly targeted to high-poverty districts than state or local funds, but they did not close the schools' funding gap.
Share

Education
No Child Left Behind (NCLB)