The Second Derivative: International Benchmarks in Mathematics For U.S. States and School Districts 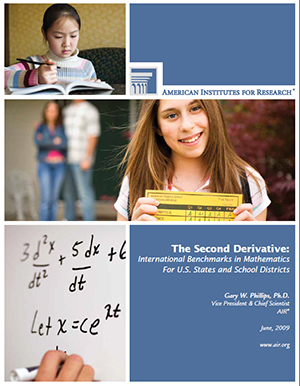 A new international grading index that provides states, school districts and policymakers with a way to determine where their students rank in comparison with their peers around the world finds that U.S. elementary school students show average performance, at best, in mathematics and are widely outperformed by their counterparts in several Asian countries, including Taiwan, South Korea, Singapore, Hong Kong SAR and Japan.

This new approach to benchmarking simplifies international comparisons by grading the countries, states and school districts with a comparable system that is more familiar to policymakers – grades of A, B, C, D, or BD (below a D). The study assumes that the international benchmark, against which we should calibrate our expectations and monitor our success, is a grade of B.

The report, issued today by the American Institutes for Research (AIR), based on international performance benchmarks in math for 4th and 8th grade students concluded that only 4th graders in a handful of states – among them Massachusetts, Minnesota, New Jersey, New Hampshire, Kansas and Vermont – are learning at B or B- levels when compared with students internationally. At Grade 8, only Massachusetts achieves a grade of B.

The study was sponsored by AIR as part of its mission to provide relevant research to policymakers and practitioners seeking to improve school performance.

In rating the performance of states and school districts, the AIR report found even more cause for concern, noting “a general tendency among the states and districts to drop in performance from grade 4 to grade 8.”

By Grade 8, for example, five major school districts (Los Angeles, Chicago, Atlanta, the District of Columbia and Cleveland) had fallen from C grades to the D+ level. Previously only the Washington, D.C., school system held this distinction. Similar drops do not occur among the high-performing Asian nations.

Below is the video of a panel discussion from June 16, 2009 featuring: