In the 20 years since the Family and Medical Leave Act passed, Americans have taken more than 100 million leaves to recover from illness, care for a new child, or tend to a sick relative, a new Department of Labor study reveals. Most employers say these breaks haven’t sapped productivity or profitability. Yet, the legislation’s initial inspiration—to help parents take time off to care for a new baby—is far from realized. 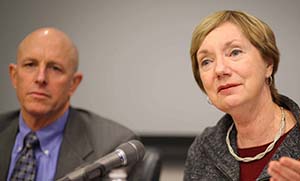 This leave act has expanded access to job-protected, unpaid leave for infant care. But many women can’t get in on the deal because they are more likely than men to work for small businesses exempt from the law. As many as one in three mothers working at least a year before giving birth do not qualify for leave. And many who are eligible can’t afford leave without pay so they don’t take it. Most parents who get paid leave just burn through their sick and vacation leave.

In the private sector, access to leave depends largely on the company and varies wildly. The five months’ paid leave Google employees get must seem like a perk from another planet to the women who sell shoes or pick fruit or care for preschoolers. Few service industries offer even minimal paid leave.

American exceptionalism’s dark side shows up in our paid leave policies. All other industrialized nations offer paid leave for new mothers and fathers. Australia provides 18 weeks, the U.K. 39 weeks, and Canada a year. (We’ll leave Scandinavia—the leaders—off the table to depoliticize the comparison.)

No wonder that new mothers in the U.S. return to work quickly—41 percent within three months, compared to only 7 percent in the U.K. Less educated, lower paid mothers—the same mothers least able to afford quality child care—are the most likely to return to work within two months of giving birth.

The results? Many mothers return to work before they are physically ready. Fewer babies are breastfed and fewer get well-baby visits and immunizations. Most troubling, since it takes several months for parents and their babies to learn to read each other’s cues, returning to work early may undermine attunement and attachment. This in turn influences brain wiring and can stunt a baby’s cognitive development and a child’s ability to form positive relationships.

The cost of this proposed leave policy would be modest. In California, which has offered part-paid family leave since 2004, claims cost less than initially predicted, about $41 per year per tax-paying employee. Nationally, 12 weeks of parental leave would cost roughly $9.4 billion. For a leave policy at the low end of the European range, the estimated cost would be about 0.1 percent of the U.S. GDP, about $14.5 billion. That’s less than one-third of the $45 billion spent on kindergarten and would arguably have far more influence on brain development.

Up to $13 billion of this sum could, according to research reported in Pediatrics, be offset because treatment costs for infectious disease would fall as breastfeeding increased. We might also see drops in the $50 billion spent annually on special education and in the $14 billion spent on compensatory education. Beyond that, employers would spend less on employer turnover and re-training, which one Big Four accounting firm estimates can cost 1.5 times the annual salary of each departing professional.

The real bottom line is, of course, child development. Providing paid family leave helps employed parents welcome a new child into the world. While a paid leave policy will not inoculate children against all ills, it will help promote a more stable foundation for children and families to deal with them. Paid leave is a family value. And it won’t break the bank.

Susan Muenchow of the American Institutes for Research and Christopher J. Ruhm of the University of Virginia’s Economics Department are co-authors, with Yale University Psychology Professor Emeritus Edward Zigler, of TIME OFF WITH BABY: MAKING THE CASE FOR PAID CARE LEAVE.