In the Months Ahead, the Real Threat to Your Health is the Flu

Is it Ebola? Much more likely, it’s the flu. And the flu can be serious. According to the data from the Centers for Disease Control and Prevention, 5% to 40% of Americans get the flu each year. Between 1976 and 2006, 3,000 to 49,000 died from the flu each year. And more than 200,000 are hospitalized each year with flu complications. Yet, many Americans mistakenly dismiss the flu as a benign threat: Only 45 percent of Americans got a flu shot last year—an easy and proven preventative measure.

Meanwhile, Americans in large numbers fear Ebola. A HealthDay/Harris poll in late October showed nearly half of Americans consider Ebola a moderate or major health threat. This number is down only slightly from 55 percent in early October. But only two cases of Ebola have ever been transmitted in the U.S., and other patients who contracted Ebola in Africa have been successfully treated here without transmitting the disease to others.

So, despite the data and the repeated messages from public health officials that Ebola is relatively hard to catch (unlike the flu), why are only 47 percent of Americans more concerned about contracting seasonal flu than Ebola, as indicated in the recent poll?

Blame risk perception. Unfamiliar epidemic diseases are likelier to cause concern than familiar endemic diseases, research confirms. Add to this the high death rates reported in west Africa, the prospect of quarantine, and the thought of being treated by personnel in hazmat suits, and it’s only natural that people would be much more afraid of catching Ebola—regardless of the long odds of catching it.

Media coverage of Americans’ fear of Ebola hasn’t helped. A recent AIR media analysis of news articles from June through October found 397 that focused on this fear. Only 13 articles emphasized fear of the flu. Clearly, coverage of Ebola is disproportionate to the threat. 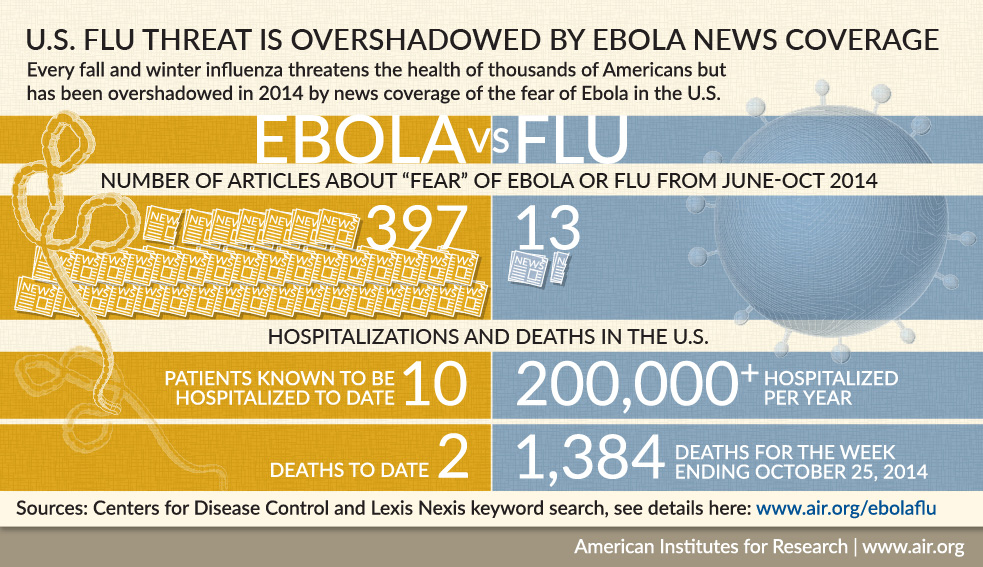 So, how do we redirect public attention away from Ebola and to the threat at hand as the flu season approaches? We need to apply risk communication principles. Dr. Peter Sandman, a risk and crisis communication expert, cites several for dealing with a “crisis” like Ebola:

One piece of Dr. Sandman’s advice that my colleagues and I who work on public health communication couldn’t agree with more is to offer people things to do. Taking action makes people feel in control. And even if they can’t do much about Ebola right now, there is one thing they can do to protect their health, the health of their loved ones, and reduce the number of Ebola false alarms.

And that is to get a flu shot.