There is a global learning crisis. Some 250 million children worldwide can’t read a single word, even though many of them have been in school for up to four years. Clearly, being in school is not the answer to learning.

The learning crisis stems from myriad reasons. One huge reason that’s often overlooked is related to language. Most of these children are learning in multilingual settings. That cardinal fact has social, economic, political, and educational implications and also raises one of the biggest questions education stakeholders grapple with: what languages to teach children in. 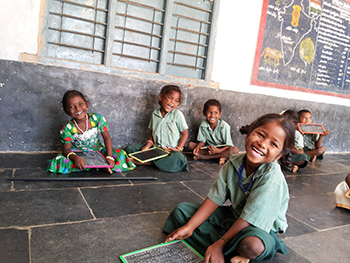 Decades of research indicate that children should be educated in a familiar language—most times, that is the language of the home or community (see Alidou et al., 2006; UNESCO, 2003). Also, research makes clear, children can learn to read well in a new language only if they have a strong foundation of literacy in their first language because of the “transfer” of skills from one language to another (see August & Shanahan, 2006; Cummins, 1981; Koda, 2008). Indeed, though it may seem counterintuitive, the best and fastest way to learn a new language is through the one you already understand. Throwing children off the linguistic deep end and trying to immerse them in English before they learn their own language invites literacy failure in both English and their own languages.

Despite this evidence, these findings are not applied to practice in multilingual contexts: millions of children around the world attend schools where their home/community language is never taught. Why? Perhaps multiple “mother tongue” groups are living within the community. That’s especially common in urban slum communities. Or perhaps the home/community language is a remote or marginalized language with no script, no teaching and learning materials, no teachers fluent in the language, or no political will that it be taught in schools.

Meanwhile, demand for English fluency is rising rapidly worldwide, especially in low-income communities where English is not used—hardly surprising given the documented link between English language competence and increased wages and socioeconomic mobility (see Azam et al., 2011; Coleman, 2011; Kapur & Chakraborty, 2008). And meeting this demand means teaching English in earlier and earlier grades—often, at the cost of building a foundation in a local language.

So what IS the best time to start learning English in these multilingual contexts? How do we design a reading program in multilingual settings that is likely to succeed? A new AIR study about facilitating reading acquisition in India sheds some light here. Given that reading skills transfer from one language to another and that children should be taught first in their local language, we asked when is there enough local language ability to support bi-literacy development. In other words, is there a tipping point?

We tested this hypothesis by measuring reading skills in about 500 elementary school children from the urban slums and rural communities of South India. We developed and implemented reading tests that were appropriate for the South Asian and Southeast Asian languages and uniquely designed for multilingual children.

Our results confirmed that indeed there was a tipping point at which bi-literacy success is more likely. If children scored more than 60% on a particular local language reading test, they had exponentially higher gains in English reading. By the same token, children who scored below 60% on this test experienced almost no gains in English. Clearly, being taught to read English too early in non-English speaking multilingual communities is likely to lead to failure to read both the local language and English while being taught to read English after achieving the threshold is likely to lead to success in both languages. And, for the first time, we might know where that point is.

The upshot for policymakers? Consider grouping classes by local language achievement skill—not just age—and introducing written English only after the local language threshold has been reached.

In multilingual contexts in the developing world, sooner is not better for English language learning. Instead, drawing on the incredible cognitive and cultural resources available in the local languages before introducing English is the most surefire way to learn to read multiple languages, including English, and to succeed in multilingual education settings. Pre-intervention education research like this makes theoretically grounded improvements in reading programming and policy possible—an important step in starting to solve the learning crisis. 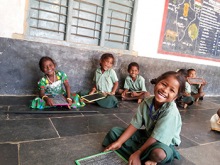 Many students around the world grow up and go to school in multilingual environments, yet there isn’t enough evidence about how to effectively promote reading acquisition in linguistically diverse contexts. The Facilitating Reading Acquisition in Multilingual Environments (FRAME) study addresses this gap by examining the predictors of biliteracy acquisition in South India. 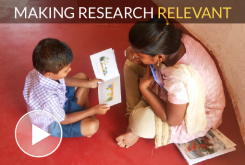 Most of the world is multilingual—at the national, community, family, and individual levels—and each of these has implications for teaching and learning. This study is one of the first to focus on a theory of change relevant for multilingual learners in the developing world. Pooja Nakamura introduces the report in a brief video.
Topic:
International, International Education, International Reading and Literacy