As published on CNN.com

Research shows that the mere presence of a weapon in a car can intensify deadly aggression. In this commentary for CNN, AIR researcher Mary Vriniotis addresses the recent road rage death of a 44-year-old mother and the complex relationship between guns and cars. 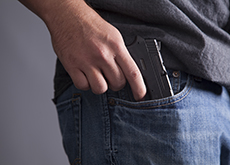 The death of 44-year-old mother of four Tammy Meyers in Las Vegas on Valentine's Day after an apparent road rage incident is the latest tragedy to challenge the adage: "An armed society is a polite society." Meyers was driving home after giving her daughter a driving lesson when she exchanged words with another driver, who was apparently annoyed she was only driving the posted speed limit of 25 miles per hour.

Armed, that driver allegedly followed her home, where police say Meyer's son confronted the other driver with his own gun and, reports indicate, opened fire upon seeing the driver's gun. The driver also fired, authorities said. Now, Meyers is dead and the other driver is still at large.

Mary Vriniotis has more than a decade of experience researching and writing about the prevention of firearms-related violence.  The opinions expressed in this commentary are solely those of the author.