The root causes of youth violence—a combination of individual, relationship, and community risk factors—are similar in communities across the globe. But community responses to improve public safety and well-being vary considerably. Local and national legislators and community leaders make decisions and allocate scarce resources to prevent youth violence—and evidence about what works can improve their likelihood of success.

To address this need in the Latin America and Caribbean (LAC) region, which has some of the highest rates of interpersonal and community-based violence in the world, the United States Agency for International Development (USAID) selected AIR to conduct a global review of the evidence on youth violence prevention. The result is a comprehensive study that can support evidence-based policymaking in the LAC region—and worldwide.

“The research team used evidence gap mapping, a growing research methodology, to analyze the existing evidence and identify systematic gaps—where there is little or no research available—so that policymakers can focus their decisions on what is known versus what might be unknown,” said AIR Principal Researcher Patricia Campie, who led the study. “It’s literally a way to connect the dots. Policymakers also can think about how to create evidence in areas where there are gaps.”

Campie shares five takeaways policymakers need to know about preventing youth violence, based on the study and her decades of experience leading community-based research, evaluation, and implementation of violence prevention initiatives nationally and internationally.

Involve community members, educators, researchers, and young people themselves in working toward aspirational goals. “There’s a saying that those closest to the problem are closest to the solution, yet we often don’t involve young people in this work,” Campie said. “I think that’s key.” 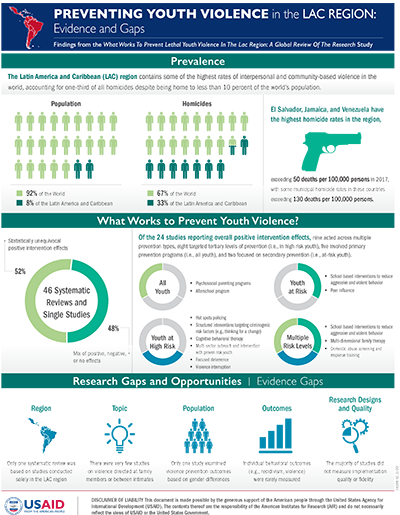 While school-based interventions are important for creating safe and supportive educational environments, schools are not equipped to address the needs of students who commit serious crimes—nor should they be. Youth violence also occurs not just in schools, but in the community. Older adolescents and young people well into their twenties may no longer be in school.

“We need to focus more on tertiary prevention, which means working with young people who are committing most of the violence in the community—gang violence, homicide, all of that,” Campie said. “We can’t just throw away, lock up, or ignore the kids who are the hardest to work with. Without intervention, they are going to continue to cause problems, because 95% of the people who go to prison come out of prison and go back to the community. If you really want to attack this problem, you have to get to the heart of it. Tertiary prevention can help people successfully integrate back into their communities and become part of the solution.”

The good news: Shifting from punishment to prevention works. “These kids have hopes and dreams and fears and skills just like everyone else,” Campie said. “There are amazing results when you apply evidence-based practices to this population—and not only for them. Community levels of crime plummet.”

The Safe and Successful Youth Initiative (SSYI) in Massachusetts exemplifies an evidence-based, effective intervention. Serving 14- to 24-year-old, high-risk youths in 13 of the most violent cities in the commonwealth, SSYI focuses on physical, emotional, financial, and educational well-being and provides evidence-based cognitive behavioral therapy, employment skills, and street outreach workers for mentoring. Multiple AIR evaluations show that SSYI reduces violence and the costs of violent crime victimization.

“The cognitive part of the intervention means giving someone an opportunity to think in a way that’s different than they normally think,” Campie said. “The critical part of the intervention is social learning—changing the thinking process and then experiencing what that means in real time in your behavior. It’s like imprinting a whole new set of behaviors on a person to change their habits.”

For example, a young person might be in the habit of committing crimes of opportunity, such as grabbing money from an unlocked car when no one is around. Friends might encourage this—or make fun of anyone who doesn’t commit the crime. Cognitive-behavioral therapy could help that person think through the consequences of criminal acts, engage in role-playing to act out better choices, and feel rewarded for positive behavioral changes.

Interventions also should be adapted to the specific problems and norms in the local community and confront systemic issues, such as racism, income and social inequality, and historical trauma.

In AIR’s research, most of the studies reviewed provided little to no information on the program implementation process, the quality of implementation, or the extent to which the interventions were implemented with fidelity or according to plan. “If you don’t know why an intervention was effective, you’re not going to be super successful at repeating a great outcome,” Campie said.

In addition, even though lethal youth violence generates the largest economic impact and greatest concerns among policymakers and community members, research on interventions for high-risk populations is uncommon. “This is an evidence gap that still needs to be addressed,” Campie said.

Learn More
Read the report, What Works to Prevent Lethal Youth Violence in the LAC Region: A Global Review of the Research(PDF).

Listen to “Young and Violent,” a podcast from the Center for Strategic & International Studies, featuring an interview with Patricia Campie. 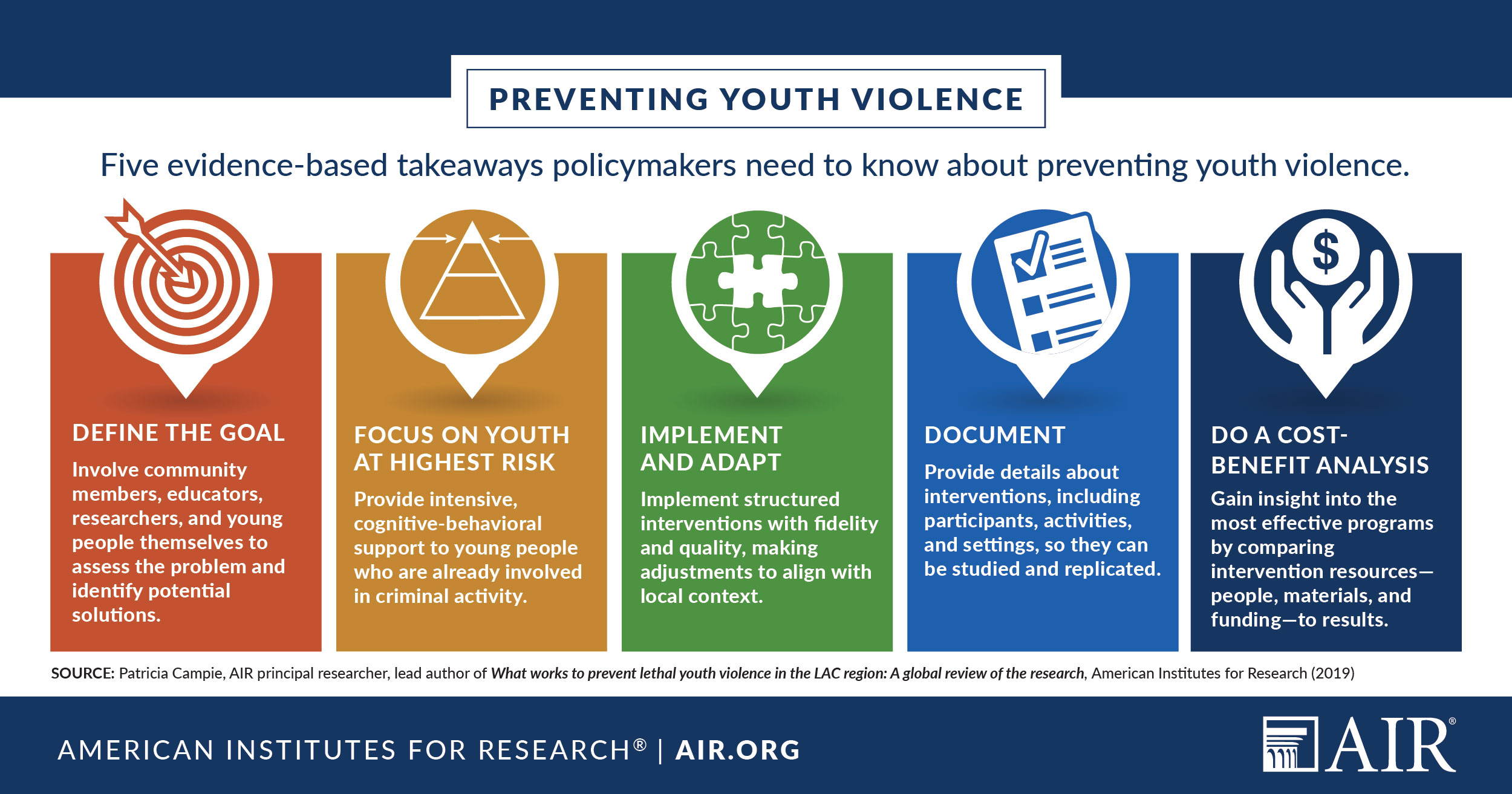 The Latin American and Caribbean (LAC) region is home to less than 8% of the world’s population, but its rates of crime and violence are some of the highest in the world, with 37% of all homicides. The Latin America and the Caribbean-Youth Violence Prevention project’s overarching goal is to ...

Gang activity remains a complex issue in Guatemalan and Honduran societies. Our Guatemala and Honduras Gang Disengagement Studies explored questions such as: Can gang members leave gangs, quit criminal activities, and rehabilitate? If so, what are the conditions and factors that influence their decisions and allow them to leave their ...
Contact