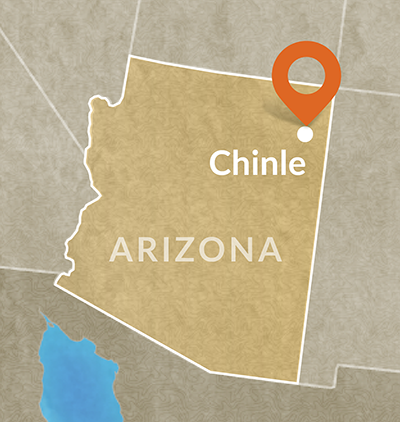 Principal churn. Teacher turnover. These two issues can have a significant effect on students.

The Chinle Unified School District faced both leadership challenges and teacher retention problems prior to the 2016-2017 school year. Three principals left in the 2015-2016 school year, nearly half of the district’s total number of principals. At the same time, Chinle’s three-year teacher attrition rate had reached 68%, and the district struggled to fill vacancies with fully qualified teachers. Nearly 80% of vacancies were filled by teachers who had an emergency certification—which expires within three years—further contributing to teacher attrition. For smaller schools, like those in Chinle, losing and replacing principals and teachers has a significant effect on students’ ability to feel like they are a part of a stable, safe, and welcoming school.

Chinle at a Glance
Chinle (Chʼínílį́), Ariz., is in the heart of the Navajo Nation and Land of the Diné, or Navajo People. Chinle Unified School District operates within the Arizona’s public school system. Students are considered part of the Navajo tribe, so the school district must consult with the tribal government, which works directly with the Bureau of Indian Education under the auspices of the federal government.

There are seven schools and more than 3,647 students in the Chinle school district, making it the largest school district in the Navajo Nation in terms of both student enrollment and geographic area. Chinle High School is the largest primarily Native American public high school in the United States.

A Need for a New Approach

Chinle school district leaders already provided their seven principals with professional development opportunities, and the district’s schools had experienced positive outcomes from those efforts. However, leaders wanted additional, external support to further shift principals’ behaviors and thinking about instructional leadership, and they were committed to providing every leader with learning, support, and tools to implement school leadership best practices within a collaborative organizational learning structure. Leaders also realized that job-embedded, relevant, and targeted professional development and principal leadership coaching would support both principal and teacher retention.

The Effects of Principal Churn

Excerpted from A Policymaker's Guide to School Leadership

In fall 2017, AIR began providing competency-based turnaround leadership coaching. This method focuses on the patterns of thinking, feeling, acting, or speaking that cause a principal to be successful within four domains. In year one, and continuing in year two, the leadership competency focus is:

AIR’s leadership coaching starts by working with districts and principals to identify common needs, as well as each principal’s individual needs. In the first year of AIR’s partnership with Chinle, principals and district leaders learned about competency-based turnaround leadership and principals performed a self-assessment. This revealed that principals had rated themselves on leadership practices at the lowest and next-highest levels.

The next stages of coaching involve additional assessment, goals-setting, and individualized, confidential skill-building and support to help principals with data inquiry and instructional planning.

All seven Chinle principals participate in monthly, on-site, shoulder-to-shoulder leadership coaching and twice monthly virtual coaching sessions to support each principal’s turnaround competency growth. At several points throughout each quarter, each principal works with their coach to analyze progress along the competency continuum by using formative assessment and benchmark data, attendance and discipline data, classroom walkthrough data, and climate and culture surveys. The coaching collaboration allows time for reflection and revisions to principals’ leadership practices.

Chinle’s principals are collectively on their way to sustaining effective systems and processes, which ultimately will lead to increased student attendance and teacher satisfaction.

Throughout year one, principals’ growth in competency leadership increased on average one level. At the start of the 2018-19 school year, the second year of Chinle’s partnership with AIR, principals’ reflection and baseline assessment of the turnaround leader competencies indicate an average growth of one to two levels.

Further, most principals are personally facilitating data meetings, monitoring the effectiveness of instructional strategies, and observing teachers to ensure that the data-informed plans are reflected in classroom instruction.

Doug Clauschee, associate superintendent of instruction, says, “Given that the quality of school leadership is a significant factor in student achievement, Chinle Unified School District strives to create conditions to systemically support, develop, and retain highly effective school leaders.” He adds, “The coaching support from AIR for turnaround leadership … has been an effective way to accomplish this objective.”

Melissa Irby is a principal turnaround specialist, certified by the University of Virginia Darden Business and Curry Education Schools, as well as a former school turnaround principal. She has served as a leadership coach for more than 12 years.