According to new AIR analysis of an international survey by the Organisation for Economic Co-operation and Development (OECD), a surprisingly large number of adults in the United States cannot apply reading or math skills to solve simple real life problems.

The Programme for the International Assessment of Adult Competencies (PIAAC) covered 23 countries, measuring key skills. Five thousand adults, ages 16 to 65, were tested in the United States in 2011-12. Initial results were released in 2013. AIR’s new analysis shows:

Example: They can read several brief paragraphs about the results of an election and determine the name of the winning candidate, but they can’t go to a website about a fundraising event and find the sponsor’s phone number.

Example: They can look at a photo of 35 candles in a box and say how many boxes would be needed to hold 105 candles, but they can’t figure out how much a salesman should be paid for mileage (miles x per mile rate) plus expenses. 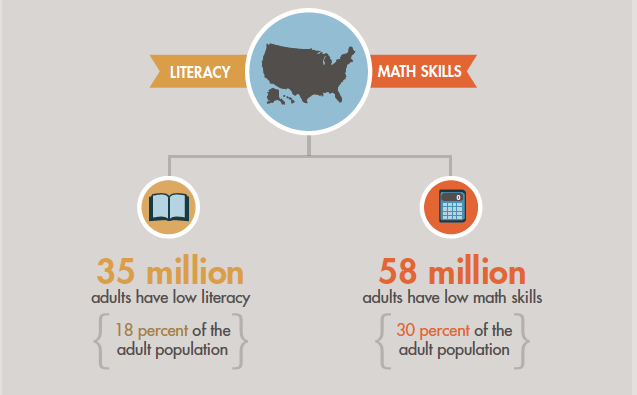 Perhaps more troubling, about two-thirds of those with low skills have at least a high school education and most are American-born. That means they may not have a chance at needed adult education. The federally funded and state-administered adult education system can serve only about 2 million people a year. Budget constraints often limit training to those who lack a high school credential or English language proficiency.

With these new results from PIAAC in hand, educators, researchers and policymakers will do well to find out what accounts for the number of adults performing at low levels and determine how to improve their chances in a demanding jobs market.

Dan Sherman is a managing director at AIR. He specializes in statistical analysis of international datasets.

Program for the International Assessment of Adult Competencies (PIAAC)

The Program for International Assessment of Adult Competencies (PIACC) is a cyclical, large-scale, direct household assessment that compares the basic skills and competencies of adults around the world. It measures relationships between individuals’ backgrounds and cognitive skills in the areas of literacy, numeracy and problem-solving. AIR provides technical, analytical, and ...
Related Topics
Education
College and Career Readiness
International Comparisons in Education
Mathematics Education
Workforce