This fall, students at Purdue University will likely have a new way to pay their tuition: income share agreements (ISAs). Students who use ISAs will receive money upfront to pay for college, and, in return, they will commit to paying their funders a percentage of their income for a specified number of years after graduation.

As Purdue and other schools get set to offer Income Share Agreements, these new programs could put students in a sticky situation. If they don’t understand the tradeoffs of loans versus ISAs, students could end up replacing their federal loans with much more expensive ISAs. To prevent students from losing out on less expensive forms of credit, financial aid officers will need to help students find an ISA that’s just right for them.

In a brief released today, Income Share Agreements on Campus: A Practice Guide, AIR researchers note that ISAs are not included in any regulations or official guidance for financial aid officers. Until the Department of Education determines how campuses should treat ISAs, it’s up to financial aid administrators to figure out how to award ISAs and to ensure that ISAs don’t crowd out federal student loans, including those based on financial need. 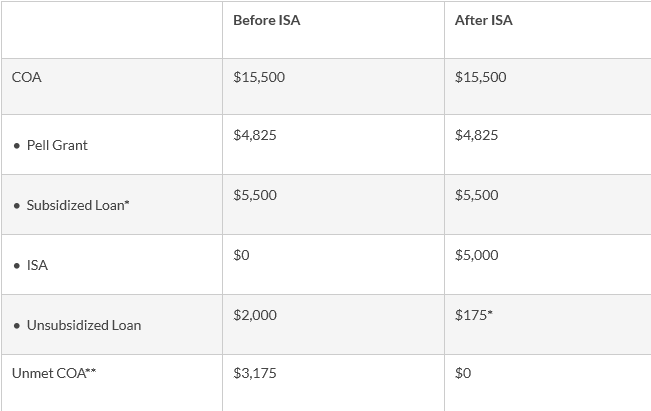 *Schools are allowed, but not required, to process Direct Loan amounts less than $200.
**Unmet COA is a calculation of the difference between a student’s costs and financial resources. It excludes EFC, an index used to determine a student’s eligibility for such need-based aid as Pell Grants. EFC is not the amount of money that families must pay.

In this scenario, Carl’s ISA helps him cover his unmet need, but also replaces most of his unsubsidized loan. By accepting the ISA, Carl loses access to a federal student loan with generous repayment terms, such as a six-month grace period after leaving school, and the option of enrolling later in income-driven loan repayment. This is not a win for Carl.

If he took out only a $3,175 ISA, he would still qualify for his unsubsidized loan and be in much better financial shape.

Now what if Carl’s college financial officer advises him to replace his subsidized and unsubsidized federal loans—everything except the Pell Grant—with one $15,000 ISA? 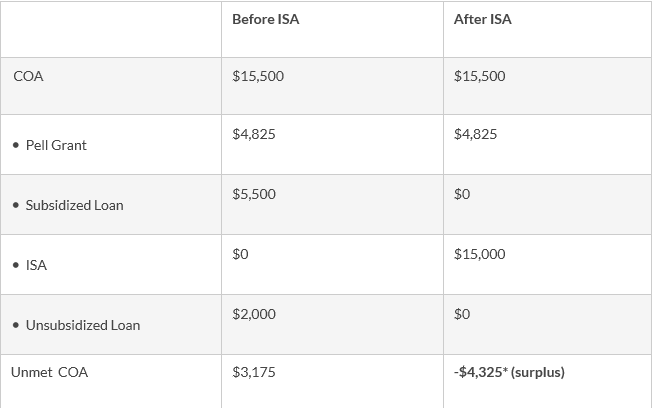 *When adjusting for the ISA, a college financial aid officer cannot decrease the Pell grant amount. Students are allowed to keep the Pell grant, even if all other federal aid amounts are reduced to zero.

For this loan consolidation, Carl will likely pay a lot more in the long run – even though he ends up with more than $4,000 in his pocket because he still qualifies for a Pell grant.

The total payback for any ISA varies with the number of years and the percentage of income in the loan agreement. Most likely, the payback time and income percentage on a $5,000 ISA would be lower for a $15,000 one. Still, it’s unlikely ISAs will ever be cheaper than federal student loans.

Here’s how the numbers break down:

Bottom Line: Carl needs a $3,175 ISA to pay for school. That’s all he should take in an ISA.  Any ISA larger than that would likely be more expensive than federal student loans. Carl needs a financial aid counselor to explain this tradeoff.

As institutions begin offering ISAs, they should look hard at how financial aid officers counsel students about their options. In cases where ISAs are offered instead of loans, students will need to understand the trade-offs. Even if ISAs replace private loans or Parent PLUS loans, which generally cost more than unsubsidized and subsidized federal loans for undergraduates, financial aid officers should be prepared to help students make smart decisions about how to pay for college.

Audrey Peek is a researcher at AIR. She is a doctoral student researching income-driven loan repayment at George Washington University.