Florida Numbers Show Not All Apprenticeships Are Equal

Apprenticeships—or to be more precise, the praise of apprenticeships—is everywhere. In his 2014 State of the Union address, President Obama called for expanded access to apprenticeships and has endorsed apprenticeships in other speeches. In mid-April, the President put resources behind that talk, unveiling a $100 million fund to support apprenticeship programs. The idea is that businesses, unions, community colleges or nonprofit organizations could form partnerships to teach skills for hard-to-fill jobs, including information technology, healthcare and advanced manufacturing.

The White House says that 87 percent of apprentices get jobs after finishing their training programs, with an average starting salary, nationally, of more than $50,000 a year. If this is true, the small and declining numbers of students in apprenticeships is a terrible waste. Data from Florida confirm that apprenticeships are not widely used but the data also suggest that not all apprenticeships are created equal. [1]

Table 1 shows the number of students who completed various sub-baccalaureate credentials in Florida between the 2006/07 and the 2011/2012 academic years. Data for bachelor’s degrees, the most common undergraduate degree granted in Florida and the nation, are also included, as a comparison point. Verifying that apprenticeships are relatively infrequently used, only about 7,800 apprenticeships were completed during the five-year span, the lowest number of completers across all the credentials listed in Table 1.

One part of the new consensus about apprenticeships is also confirmed—completers can do quite well in the labor market. Note that the average first year wages for an apprenticeship total more than $37,000, the third highest behind the technically-oriented associate’s degrees in applied science and associate in science. And note that apprentices earn more than graduates with Bachelor’s degrees. While short of the $50,000 wages noted in the White House’s fact sheet, apprentices on average earn a solid wage.

Perhaps most important, as the rush to embrace apprenticeships unfolds, we need to remember that not all apprenticeships lead to equal outcomes. Table 2 shows the first-year wages of apprentices according by program completed (based on the federal government’s Classification of Instructional Programs). 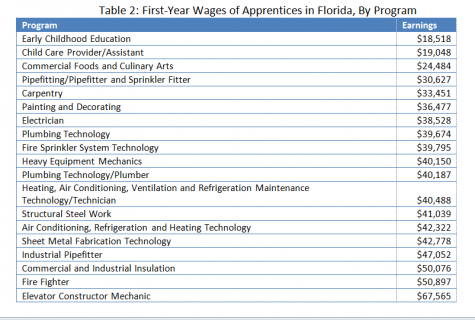 [2] More information on the economic success of Florida graduates >>

Apprenticeship programs in early childhood education do not yield high pay; neither does an apprenticeship in culinary arts. On the other hand, apprentices in fields that keep things working (elevators, plumbing, pipes, HVAC systems) can yield salaries above $40,000 (only three of these programs meet the $50,000 salary cited in the White House fact sheet).