This is second in a series of posts on ESSA’s implications for student subgroups. Read the first in the series: What Will ESSA Mean for English Learners?

A large body of research supports the idea that Native American, Alaska Native, and Native Hawai'ian students thrive in instructional environments that honor their unique cultural and linguistic heritages.

The Every Student Succeeds Act (ESSA) promises unprecedented opportunities and funding for incorporating our nation’s many indigenous cultures and languages into public schools serving Native students.

History paints a grim picture of the role of the federal government in educating Native youth. Starting in the mid-1800s, U.S. government policy called for eradicating indigenous languages and cultures. Native students were taken from their families and forced to attend boarding schools designed to assimilate them into mainstream American culture. School conditions were often appalling. Students faced brutal punishments for speaking their home languages, and crowded, unsanitary conditions meant that untold numbers of students died from such diseases as cholera and tuberculosis. Not until the 1928 Meriam Report brought national attention to these conditions did public opinion start turning against the forced assimilation of Native children.

Despite efforts to eradicate Native cultures through education, many Native communities and Nations managed to preserve their unique languages and cultures and today are working to revitalize them. Such Native-run schools as the Nkw’usm Salish School in Arlee, Montana; Bug-O-Nay-Ge-Shig School in Bena, Minnesota; and Ayaprun Elitnaurvik Yup'ik Immersion School in Bethel, Alaska, are just a few examples.

At these schools, students achieve academically while growing within their indigenous heritage. One long-standing program in Hawai'i, Ka Papahana Kaiapuni, began with nursery and preschool language immersion in the 1980s and grew steadily to follow students through each school year, all the way to the university level.

Cultural revitalization programs like these found support in the 1990 Native American Languages Act, which protects Native students’ rights to use their languages in public schools. A few federal programs also fund language-revitalization activities, but with 566 federally recognized Native Tribes and Nations, each with its own cultural heritage, more support is needed.

Each Nation’s linguistic and cultural traditions should be incorporated into local school curricula. Three factors are key:

Provisions for Family and Community Involvement in ESSA 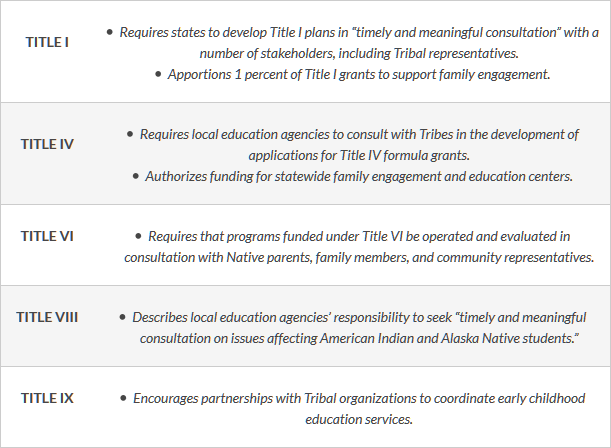 The success of these ESSA provisions depends on how well they are implemented. For now, embedding the importance of Native languages and cultures in education policy and providing targeted funding appropriations are important steps.