The bachelor’s is America’s most commonly granted postsecondary degree—and most people pretty much equate it with a college education. Yet, in the past decade, the number of associate’s degrees granted has increased far faster than the number of bachelor’s degrees given out. And for many students, both traditional, college-aged and older workers seeking new skills, the associate’s degree is often a far more efficient route into good jobs than the longer, more expensive bachelor’s degree path.

College Measures, a division of AIR, has documented that many associate’s degree majors put graduates firmly in the middle class—and may help them earn more, often far more, than bachelor’s graduates.

Recent Gallup Organization data from its ongoing national study of college graduates shows associate’s graduates have work experiences equal in quality or better than those of bachelor’s graduates. These new results reinforce College Measures’ findings that there are alternate paths to good wages, good jobs, and good lives that run through community colleges.

The majors listed here rank among the most popular in Texas for that degree level. Table 1 shows the median wages of graduates from the eight large associate’s programs whose graduates earn over $60,000. That’s within $3,000 of what the Census’ American Community Survey says was the median family income for Texas in 2014, the year the wage data were collected. Obviously, at this rate a graduate from these associate’s programs with a working spouse or partner could live far above the defined median family income.

That doesn’t mean that all associate’s degrees are equal in the job market though. Four of these high paying majors have the word “technician” in the program name, two are computer/IT related and two health care related. So a modern-day Horatio Alger might advise young people to get ahead by learning how to keep people healthy or keep things running.

Now look at the median wages of graduates from 10 of the largest bachelor’s majors with one common characteristic--wages lower than the median of all associate’s degree graduates (see Table 2). What jumps out of Table 2 is that the many humanities and social sciences don’t pay very well, at least in the first decade after graduation.

Average bachelor’s graduates do out-earn associate’s graduates, but not across the board. And it’s  hard to believe that graduates with degrees in Human Development, Family Studies, and Related Services, or Fine or Studio Arts earning in the mid-$40,000s are thriving financially compared to associate’s degree graduates with technical or health care degrees who are earning over $20,000 per year more!

From an afterthought to a potential postgraduate training programming for bachelor’s students, a remarkable change is taking place. Combining the Gallup and the College Measures data show the toll of the nation’s obsession with the bachelor’s degree but the data also point to the cheaper, faster pathways to good jobs with good wages that run through the nation’s community colleges. 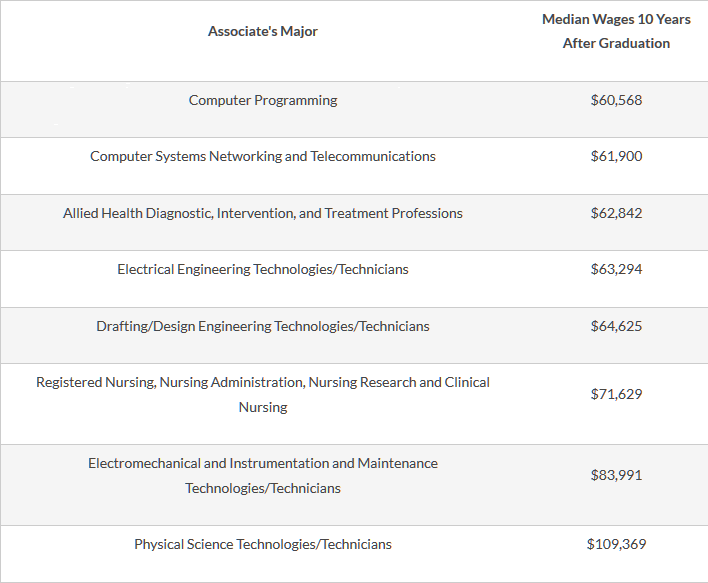 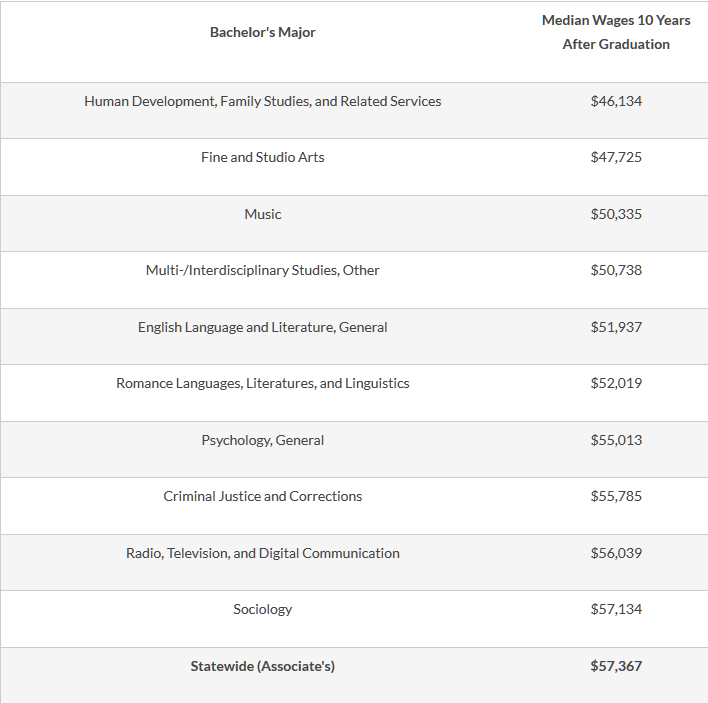 Mark Schneider is a vice president and an Institute Fellow at AIR. Prior to joining AIR, Dr. Schneider served as Commissioner of the National Center for Education Statistics from 2005-2008. Dr. Schneider is also a visiting scholar at the American Enterprise Institute and Distinguished Professor Emeritus of political science at the State University of New York, Stony Brook.