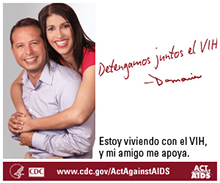 Detengamos juntos el VIH™, the Spanish version of the previously launched Let’s Stop HIV Together campaign, comes with new campaign materials targeting Hispanics between 18 and 44, including people living with HIV/AIDs, and friends and family of those affected by HIV and other stakeholders. In 2009, Latinos accounted for 20 percent of new HIV infections while representing about 16 percent of the total U.S. population.

The new campaign materials are now available on the newly launched Act Against AIDS Spanish-language website. The Miami-Dade County Health Department recently held a launch event and the Los Angeles County Department of Health will also host one at a later date. Miami and Los Angeles are two cities with some of the highest HIV/AIDS prevalence rates among Latinos in the country:

The rollout of Spanish-language materials marks the second phase of the Let’s Stop HIV Together campaign AIR is heading on behalf of the Centers for Disease Control and Prevention (CDC). The campaign aims to increase HIV awareness, knowledge, and information-seeking behavior while reducing stigma by giving voice to people living with HIV.