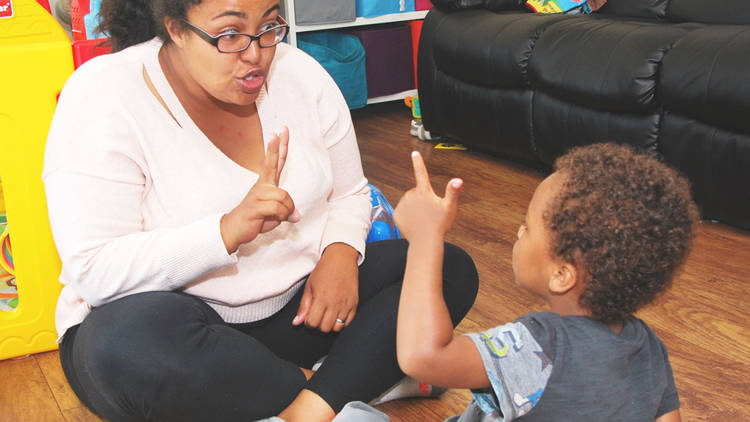 Although nearly all young children have the capability to learn and acquire core competencies in mathematics, many will not realize their full potential because of limited learning opportunities. This is particularly the case for children from low-income families who start out behind and are unlikely to catch up without some type of intervention (NCTM, 2013; NRC, 2009). While there are many interventions aimed at boosting young children’s language and literacy skills, there are fewer aimed at improving math learning for young children, and even fewer that target children younger than preschool or kindergarten age.

To address this need, AIR, in collaboration with ZERO TO THREE , developed a program to help parents and caregivers better stimulate math learning among their two- and three-year-old children at home. The Math4Littles program provides concrete ideas for engaging children in math learning opportunities across six foundational early math domains: number knowledge, spatial awareness, shapes, patterns, measurement, and operations and relations. The program includes 36 activity guides—available in both English and Spanish—that provide fun, everyday math activities over a period of 12 weeks. The activity guides are posted online and delivered to parents through a series of text messages.

To evaluate the impact of Math4Littles, we conducted a randomized controlled trial (RCT) in which families—consisting of a parent and a child (2.5 – 3.5 years old)—were randomly assigned to either a treatment or control group. Parents in the treatment group received text messages with links to the activity guides, videos, and the online forum invitation. Parents in the control group were expected to support their children’s development as they normally do, without receiving any additional resources. The study sought to address three research questions: 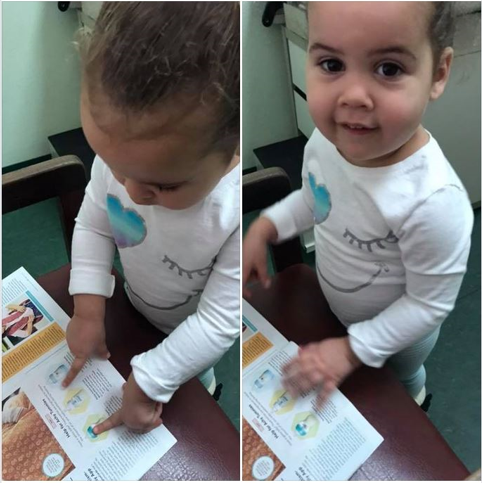 We collected data from families at three points in time: (1) at baseline, (2) mid-intervention (approximately 10 weeks into the intervention), and (3) post-intervention (approximately 4-6 week after the end of the intervention. Parent beliefs and behaviors and child skills were measured at baseline through a parent survey and child assessments. Parent outcome data were again collected by survey mid-intervention. At the post-intervention timepoint, we repeated the child assessments, added an observation of parent-child interaction, and surveyed the parents a third time. We analyzed impact at each of the two latter time points, taking baseline scores into account.

Our primary measure to answer Research Question 1 was an 11-item scale on the parent survey gauging parents’ beliefs that math is important for young children.

To assess children’s math skills (Research Question 3), trained data collectors administered seven math-related assessments with each child: a subitizing task developed by the study team and six subtests from the Brigance Inventory of Early Development (Brigance, 2013) (counting objects, verbal counting, sorting/classifying objects, comparing quantities, identifying shapes, and directional/positional concepts). Subitizing is the ability to recognize the quantity of objects in a set without counting. Three of the assessments (comparing quantities, identifying shapes, and directional/positional concepts) were administered post-intervention only.

In addition to the math assessments, we also administered an expressive vocabulary test to gauge the child’s basic language skills. This measure—the Picture Vocabulary subtest of the Woodcock Johnson III Tests of Achievement (Woodcock, McGrew, & Mather, 2001; 2007)—simply asks the child to name objects shown in pictures. We administered it at both baseline and post-intervention.

Parents who received the activity guides reported using about two thirds of them with their children. On average, treatment parents used about 22 of the 36 activities over the course of the 12-week period. Although usage was not 100%, this suggests that an intervention like Math4Littles could be a feasible approach to supporting parent learning.

The program increased parent-reported beliefs about the importance of math for young children. Parents who received the activities were more likely to endorse a belief that math is important for very young children. The program did not change parents’ sense of self-efficacy regarding math.

But when given an opportunity to interact with their children post-intervention, treatment parents spontaneously did more math activities overall; and, in particular, they did more activities related to math domains beyond counting. The analysis of the ARMOR observation data revealed that treatment parents did more math activities with their children. Interestingly, they did not do more numbers-related math activities, but they did do more activities across the other domains (e.g., measurement, patterns, and spatial awareness). This suggests that the program was successful in showing parents that math is about much more than just numbers and counting.

The program did not have a significant effect on parents’ non-math interactions with their children or in the quality of their interactions generally. There were no significant differences between treatment parents and control parents on a parent survey scale gauging parents’ use of non-math activities with the child. In addition, there were no differences between treatment and control parents on the quality of observed interactions using the PICCOLO.

The program improved children’s subitizing scores but did not have a significant effect on other math outcomes. We found a significant positive difference between treatment children and control children on one measure: the subitizing task. Subitizing is a foundational skill, important for the development of later math skills. Although this finding was promising, we did not find significant impacts on the other child outcomes measured: counting objects, verbal counting, sorting/classifying objects, comparing quantities, identifying shapes, and spatial awareness. 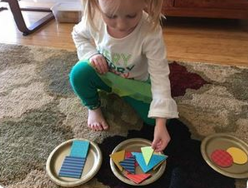 Although impacts were modest, there are important implications to be drawn from this study. There is widespread acceptance of the vital contribution that parents make to their child’s literacy skill development, beginning at birth. However, the value of exposing children to early math concepts at home at a very young age is not as widely accepted. This study provides some evidence that a simple, relatively low-cost program can influence parents’ thinking about the importance of early math learning and can increase their ability to provide math learning opportunities for their young children. Further research should be considered to explore longer-term benefits or effects of early math learning.

Although this research study was focused on math activities for parents, the activities could reasonably be adapted for use in early care and education settings. The activity guides from this program could help early care and education teachers glean ideas for math activities they can do with very young children that are fun and easy to set up. Increasing exposure to early math learning opportunities across settings may help to reinforce math concepts for children and strengthen the benefits for our youngest learners. 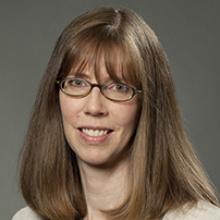 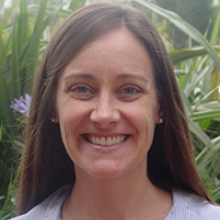