WASHINGTON, D.C. - Public deliberation—a way to capture in-depth perspectives on controversial issues—effectively provides informed public views on complex health policy issues, such as the role of medical evidence in treatment decisions, according to a randomized controlled trial conducted by the American Institutes for Research (AIR) and published in the May edition of the peer-reviewed journal Social Science & Medicine.

Conducted as part of the Deliberative Methods Demonstration funded by the Agency for Healthcare Research and Quality (AHRQ), the AIR study is among the first large-scale randomized controlled trials of alternative methods of public deliberation and included 1,338 people assigned to take part in one of four deliberative methods or to a reading-materials-only control group.

The participants all considered the same health policy issue: “Should individual patients and/or their doctors be able to make any health decisions no matter what the evidence of medical effectiveness shows, or should society ever specify some boundaries for these decisions?”

“There is growing awareness that informing and engaging the public—both as patients and as citizens—is critical to achieving better care and better health,” said AIR Vice President Kristin L. Carman, Ph.D., lead author of the study and executive director of AIR’s Center for Patient & Consumer Engagement.

“The study findings indicate that public deliberation is an effective way for policymakers to both engage citizens in complicated health care issues and potentially to ‘see around the corners’ to better understand and anticipate how public attitudes might change as people learn more about specific issues and discuss them,” Carman said.

The results of a related AIR analysis published in the February Journal of Health Care for the Poor and Underserved underscore the value of public deliberation as an effective way to gather diverse public input, including views of people from differing racial and ethnic backgrounds and education levels. The study found that regardless of race, ethnicity or educational attainment, participants showed similar increases in knowledge following deliberation.

Both the Social Science & Medicine study, titled “Effectiveness of Public Deliberation Methods for Gathering Input on Issues in Healthcare: Results from a Randomized Trial,” and the Journal of Health Care for the Poor and Underserved study, titled “Deliberation: Obtaining Informed Input from a Diverse Public,” are available online, along with a fact sheet, Public Deliberation: Bringing Common Sense to Complex Health Policy Issues explaining more about public deliberation and the study findings.

Established in 1946, with headquarters in Washington, D.C., American Institutes for Research (AIR) is a nonpartisan, not-for-profit organization that conducts behavioral and social science research and delivers technical assistance both domestically and internationally in the areas of health, education, and workforce productivity. For more information, visit www.air.org.

AIR’s Center for Patient & Consumer Engagement is committed to transforming health care delivery in ways that truly put patients and families at the center of care. Greater engagement of patients and families in direct care decisions, health care organizational design and governance, and public policy is key to achieving better care, better health and lower costs. To learn more about the Center’s conceptual framework for patient and family engagement, visit http://aircpce.org. 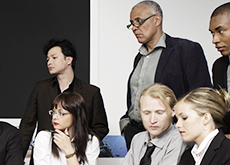 New research indicates it is an effective way to gather informed public views on complex health policy and to help guide policy decisions. This fact sheet provides an overview of public deliberation—convening a diverse group of citizens to consider an ethical or values-based dilemma and weigh alternative views—and what evidence says about its effectiveness.
15 May 2015
Journal Article

Effectiveness of Public Deliberation Methods for Gathering Input on Issues in Healthcare: Results from a Randomized Trial

The U.S. health care system’s complexity, coupled with the emotional and personal nature of serious illness or injury, often makes it difficult for policymakers to obtain informed public views to help guide decisions on complicated health care issues. This study found that public deliberation, which encourages people to become informed about a topic and consider alternative perspectives, shifted participants' attitudes about the importance of medical evidence in treatment decisions.
Share