Washington, D.C. – A new analysis by the American Institutes for Research (AIR) shows 61 percent of those with a STEM (science, technology, engineering and mathematics) doctorate have careers outside of academia. Although most STEM Ph.D. programs require rigorous research training, 43 percent of graduates in non-academic careers say research and development is not their primary work activity. 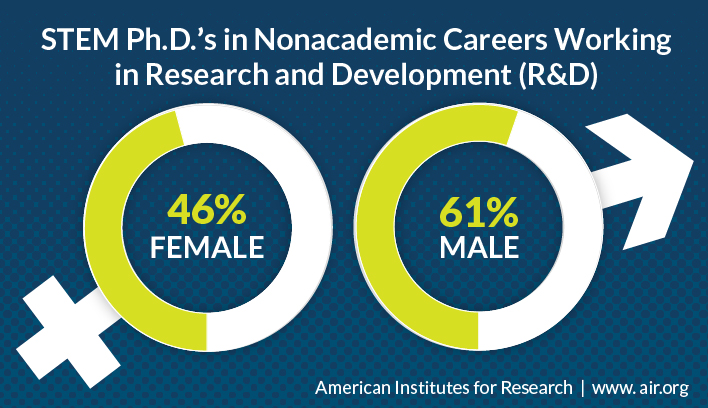 “Performing work unassociated with research and development is common, particularly among women with STEM Ph.D.’s,” the authors of The Nonacademic Careers of STEM Ph.D. Holders said. “This tells us that Ph.D. students need more skills training that’s instrumental to their careers. Retention in STEM—particularly for underrepresented groups—would improve if Ph.D. training and career guidance are more relevant to the nonacademic sectors most students enter.”

The authors analyzed weighted data on more than 400,000 STEM doctorate recipients who earned degrees between 1959 and 2010.

Other notable findings include: 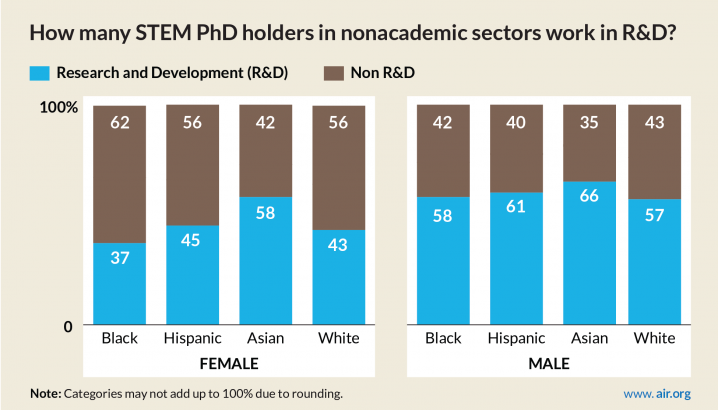 The findings are based on data from the 2010 Survey of Doctorate Recipients, collected by the National Science Foundation.

The Nonacademic Careers of STEM Ph.D. Holders is the latest in a series that explores issues related to broadening participation in STEM graduate education. Previous research briefs include Early Academic Career Pathways in STEM: Do Gender and Family Status Matter?; The Price of a Science Ph.D.: Variations in Student Debt Levels Across Disciplines and Race/Ethnicity; and How Long Does it Take? STEM Ph.D. Completion for Underrepresented Minorities.