Washington, D.C. – Thirty years after the release of the landmark A Nation at Risk report on the quality of U.S. education, seven experts with the American Institutes for Research (AIR) assess the report’s lasting impact in relation to current education challenges and reforms.

In 1983, the National Commission on Excellence in Education issued A Nation at Risk: The Imperative for Educational Reform. The 18-member commission’s findings were blunt. “Our Nation is at risk. Our once unchallenged preeminence in commerce, industry, science, and technological innovation is being overtaken by competitors throughout the world.”

“We report to the American people that while we can take justifiable pride in what our schools and colleges have historically accomplished … the educational foundations of our society are presently being eroded by a rising tide of mediocrity that threatens our very future as a Nation and a people. What was unimaginable a generation ago has begun to occur – others are matching and surpassing our educational attainments,” the report found.

The three decades since those words jarred the conventional wisdom about the nation’s education system have seen many efforts to bring about change. “Have these education reforms led to student progress? That depends on which indicator is used, but the data overall suggest that A Nation at Risk has had a positive effect,” says Dr. George Bohrnstedt, an Institute Fellow and former senior vice president for research at AIR. He notes that, “By the numbers, the news is good. But do the nation’s children actually know more? Here, the message is more mixed … The reading scores of 13-year-olds grew only slightly during these decades but their mathematics scores grew more impressively.”

Institute Fellow Dr. Beatrice Birman says the report’s “most visible and lasting influence has been laying groundwork for raising standards and expectations for students – that is, standards-based reform.” The report, she says, also “set the stage for reshaping the federal role in education, strengthening and increasing the presence of federal programs and policies in the nation’s schools, and laying the groundwork for several decades of state, local, and federal reforms.” Video highlights of her comments are also available.

AIR Vice President and Institute Fellow Dr. Gary Phillips says the concern raised in the report that U.S. students were falling behind their international peers is still a major concern complicated by the fact states use different standards to judge whether a student is proficient. “The different metrics report different results. It’s like a doctor having two thermometers calibrated in different ways—one national thermometer and one state thermometer. The national thermometer says the patient is running a fever and needs treatment while the state thermometer is saying the child’s temperature is just fine,” he says.

Another expert, AIR Vice President and Institute Fellow Dr. David Osher, notes the report’s “good intentions” but says “the commissioners’ recommendations didn’t address the many factors that affect attendance, engagement, learning, and test performance – so-called conditions for learning. Focusing narrowly on students’ “hard work, and self-discipline, and motivation” without attention to these other enabling factors blunted the force of the important call for higher standards and achievement.”

Institute Fellow Dr. Jennifer O’Day, noting that “as a nation, our progress has been modest at best,” asks: “Have we accomplished the goals set forth in A Nation at Risk? No. Are we in a better position now than we were in 1983? Most definitely. We know more about teaching and learning and about system change. We have 20-plus years of experience with standards and with a focus on student learning.”

Dr. Terry Salinger, an AIR Institute Fellow, points out that “we still lack a full understanding of how to motivate students and get them to value learning to read and write for reasons other than grades and test scores. But we do know that the seeds of disenfranchisement begin take root early and must be addressed early if our educational systems are going to prepare all students to make their way in today’s schools and society.”

AIR Vice President Dr. Jane Hannaway, director of the Analysis of Longitudinal Data in Education Research Program, says that when it comes to student performance on standardized tests, performance ranking relative to other countries, and student readiness for careers and college, “things haven’t improved much over the last 30 years. But some things have changed. And those things may bode well for the future. From a public policy perspective we are in a better position. Most important, we have more and better information, and data are getting richer and more meaningful.”

The full commentary by the AIR experts is available on air.org. 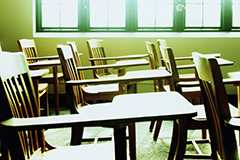 Three Decades of Education Reform: Are We Still "A Nation at Risk?"

In 1983, A Nation at Risk laid bare the state of American education and exposed what that meant for individuals and the country. Here, seven education experts from AIR weigh in on whether the report made a difference and where education is today.
Share