The Payoff for a Virginia College Degree Varies Considerably by Type of Degree, Major and College

Washington, D.C. - Is a college degree still a good investment even though tuition and student debt have skyrocketed? In general, the answer remains “yes,” but the adage that you “earn what you learn” comes with caveats, according to a new American Institutes for Research (AIR) study of short- and longer-term wages of four-year and community college graduates in Virginia.

How positive the answer is depends largely on three factors—what kind of degree a student gets, what he or she majors in, and whether a student attends a public or a private college, though these findings also must be qualified by individuals’ unique abilities, skills and experiences. (People make different education and workplace choices for many reasons. Descriptive analyses like these cannot account for all these underlying differences. Moreover, it should be noted that these analyses only cover in-state employment and earnings.)

This issue is increasingly important for students, their families and policymakers, as the annual costs of private colleges and universities now exceed $60,000, and once-free in-state tuition and fees (without room and board) for Virginia community colleges approach $4,400 per year.

According to the report, “Degrees of Value: Differences in the Wages of Graduates From Virginia’s Colleges and Universities,” bachelor’s degrees in engineering, technology, and medical-related fields tend to yield the highest earnings, but some technical associate's degrees lead to higher-paying jobs than bachelor’s degrees with liberal arts, social science, and even many science majors.

“The equation in which ‘college = bachelor’s degree = high earnings’ is not always true,” says the report’s author, Mark Schneider, an AIR vice president and Institute Fellow and a creator of College Measures, an AIR subsidiary that examines and makes public return on investment data on higher education. “Some bachelor’s degree programs don’t make the cut, and some two-year technical degrees can lead to middle-class wages.”

Median wages among those with bachelor's degrees differ considerably. Typically, those who majored in computer or electrical and electronics engineering, or computer and information sciences, earn about $58,000-$61,000 a year after graduating and $87,000-$94,000 eight years after getting a diploma. The comparable figures for sociology, English, literature and psychology degrees were $24,000-$25,000 and $42,000-$44,000. Initial low earnings are correlated with future low earnings, just as higher earnings just out of college usually signal a long-term trajectory of higher earnings.

Surprisingly, given the intense public focus on science, technology, engineering and math (STEM) fields, math, biology and chemistry majors typically have paychecks below the median for all bachelor’s degrees both one and eight years after graduation.

“When it comes to wages, perhaps we should use the acronym TEM rather than STEM—but only if we think the M stands for Medical, not Math,” Dr. Schneider said.

Median Wages at Years 1 and 8 for Bachelor’s Degrees, by Selected Majors 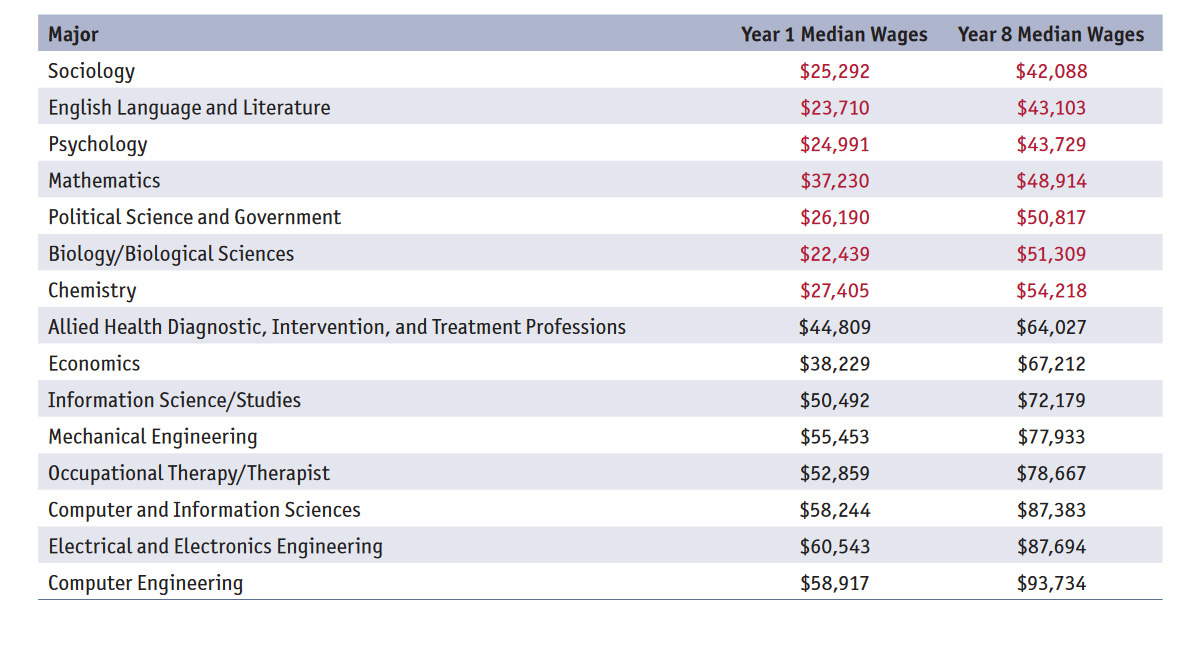 Significant earnings differences exist among graduates of community colleges, which enroll about 45 percent of postsecondary students and include individuals aiming to transfer to four-year institutions and students in occupational/technical-oriented associate’s degree or certificate programs. Occupational/tech students obtaining associate’s degrees in computer and information sciences have median earnings of $30,000 one year after graduating and $75,000 eight years after receiving their degree, with comparable figures for emergency medical technology at $44,000 and $67,000.

By contrast, “bachelor’s credit” students with AA degrees in mental and social health services, the arts, social sciences, and liberal arts have median pay of $17,000-$21,000 a year into the workforce and $27,000-$40,000 in their eighth year out of school. Occupational/tech graduates typically earn about 50 percent more than those gaining credits toward a bachelor’s degree a year after receiving an AA, but this difference all but disappears after eight years.

A similar pattern holds for community college students who complete short-term certificate programs of a year or less. Median wages eight years out of school range from about $23,000 for special education and administrative assistant jobs to about $60,000 for those in industrial production technology and radiation therapy. As Dr. Schneider commented: “Students who can fix things or keep people healthy tend to fare best in the job market.”

Although majors and the type of degree earned are related to post-graduation wages, the college or university—and type of postsecondary institution—also matters when it comes to graduates’ paychecks. Overall, students who earned bachelor’s degrees from public institutions in Virginia have median annual pay eight years after graduation that is roughly $7,000 more than graduates of private nonprofit four-year institutions—$51,383 vs. $44,303.

Virginia’s public universities—including the University of Virginia (UVA), George Mason University, Virginia Tech, and the Virginia Military Institute—take the top four spots in graduates’ median earnings among the more than 30 institutions studied. Students who graduate from any of these at age 22 will by age 30 typically receive pay between $61,000 and more than $69,000 a year. Among private colleges and universities, the University of Richmond comes out on top at about $60,000, with graduates of with bachelor’s degrees from Mary Baldwin College, Sweet Briar College, Hollins University, and others with median wages of $41,000 or less.

Although choosing a major or a college entails more than economic calculus, detailed information from this report and the College Measures website can help students make more informed decisions about whether pursuing higher education is worth the cost and worth assuming many tens of thousands of dollars in debt for a $30,000 wage.

This study draws on data and research by the State Council of Higher Education for Virginia (SCHEV) and on wage information from Virginia’s unemployment insurance (UI) records system. It includes Virginia college graduates working in the state and excludes outcomes for graduates working elsewhere, students from non-accredited institutions, and those who go on to obtain advanced degrees.

The report, Degrees of Value: Differences in the Wages of Graduates From Virginia’s Colleges and Universities, may be accessed on AIR’s website.