Washington, D.C. – A new evaluation of Title III implementation, released by the U.S. Department of Education and conducted by the American Institutes for Research (AIR), found that states and school districts vary widely in how they define English Learners (ELs) and how they set thresholds for achieving proficiency in English. As a result, a student identified as an EL in one district might lose that status by moving into another district in the same state.

The National Evaluation of Title III Implementation: Report on State and Local Implementation examines how states, districts, and schools were implementing Title III provisions in the 2009-10 school year. It found that eight states and the District of Columbia established consistent statewide criteria for identifying English Learners. The remaining 42 states gave districts discretion in identification decisions.

Title III of the Elementary and Secondary Education Act (ESEA) provides funds to states and districts and requires them to help EL students’ attain English language proficiency and meet state academic standards in core academic subjects. The evaluation addresses the lack of sufficient research on how local jurisdictions have implemented Title III.

Nationally, the number of EL students served by Title III–funded programs in kindergarten through 12th grade (K–12) increased by 18 percent between the 2002–03 and 2007–08 school years, growing from approximately 3.7 million students to 4.4 million students. 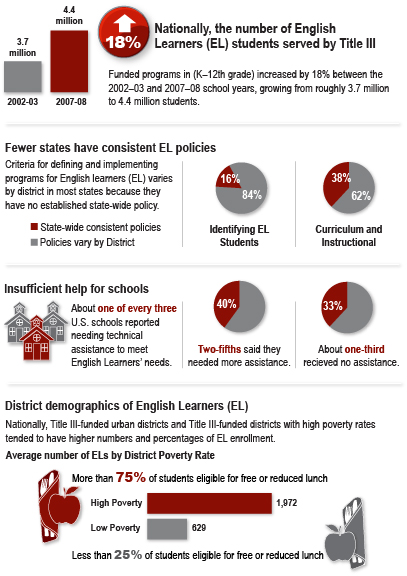 Additional findings of the evaluation include:

Information for the evaluation was gathered from interviews with Title III and assessment directors in all states, a nationally representative survey of 1,528 districts (in which 81.9 percent of the nation’s EL population was served) receiving Title III funds, and case study data collection in 12 districts across five states.

The report is part of a four-year Title III evaluation AIR is conducting for the U.S. Department of Education. The evaluation has four main objectives: (1) To describe the progress in implementation of Title III provisions and variation in implementation across states; (2) To examine how localities are implementing their programs for EL students and how these relate to state policies and contexts; (3) To determine how EL students are faring in the development of their English language proficiency and mastery of academic content; and (4) To maintain a focus on the diversity among Limited English Proficient (LEP) students and the educational implications of this diversity.

Title III of the Elementary and Secondary Education Act (ESEA) provides funds to states and districts to support ELL students’ successful attainment of English language proficiency and state academic standards. The U.S. Department of Education commissioned AIR to evaluate the Title III program to determine how well states are implementing its provisions, how state policy translates into district practices, and how well ELLs are mastering grade-level content and improving their English language proficiency.