Washington, D.C. – Majors matter. That simple mantra is sound advice for Minnesota students as they prepare for college and the workplace beyond.

A new report conducted for the Minnesota Office of Higher Education by College Measures, a division of the American Institutes for Research (AIR), examines the salaries by major of graduates up to four years after they get degrees or certificates from Minnesota public colleges and universities.

“As the cost of higher education increases, so does the pressure on students to choose a major that will lead to a good-paying job,” said Commissioner Larry Pogemiller, Minnesota Office of Higher Education (OHE). “This website offers data-based trends specific to Minnesota that can help students and families make informed decisions.”

“As a nation, we are fixated on the reputation of certain top-tier schools” said Mark Schneider, a vice president and Institute Fellow at AIR. “But in terms of return on investment, there is far less variation across graduates than one might expect. Choice of major has a far more dramatic impact on what students earn after graduation than where they go to college.”

The report’s associated website, Education Pays for Minnesota, allows prospective students to engage in a deep investigation into the wages of graduates from different majors throughout the state. For example, they may compare the wages of graduates from every psychology program in every public and many private universities in Minnesota, or compare the wages of graduates with degrees in different majors (sociology or math, for example) at a single institution, like the University of Minnesota, Twin Cities. Similarly fine-grained data can be found at different credential levels, allowing a comparison of wages earned by students in, say, mathematics at the associate's, bachelor’s and master’s degree levels. 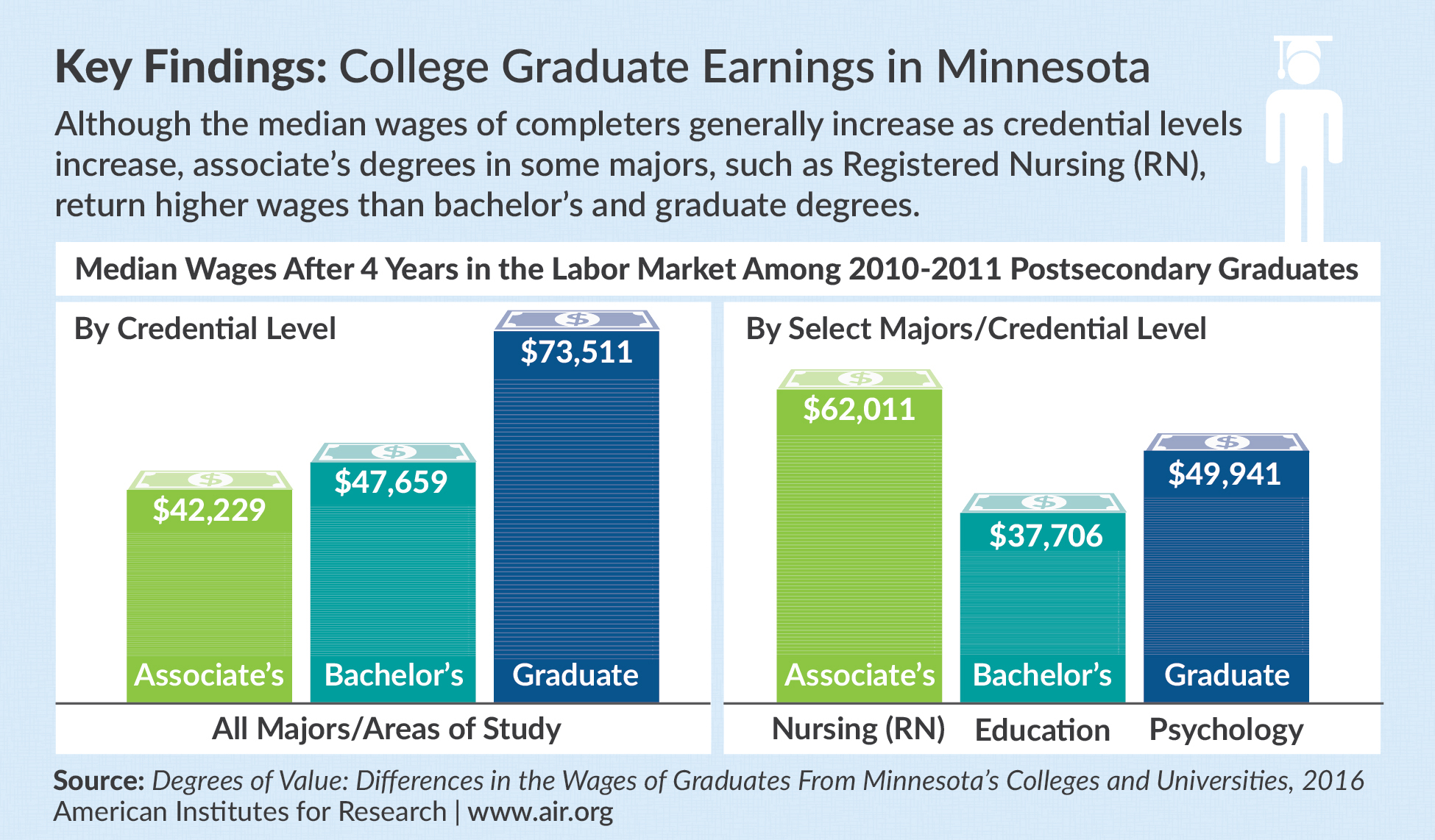 “In short, higher education usually pays—but far more for some graduates than for others,” Schneider said.

Pogemiller cautions, however, that while this data is important, it only reflects one aspect of the value of postsecondary education.

“The benefits of some degrees in terms of earnings may not become evident for as many as ten years after completion,” said Pogemiller. “There are also important social and critical thinking skills learned in college that are needed to solve the increasingly complex problems our world faces. Our democratic system relies on an educated populace.”

Degrees of Value: Differences in the Wages of Graduates from Minnesota’s Colleges and Universities is available at www.air.org.

Degrees of Value: Differences in the Wages of Graduates from Minnesota's Colleges and Universities

Students invest their time and money in postsecondary education for many reasons, but one of the most important is the belief that a college degree will lead to a good job and a higher salary. This report centers on several important findings related to wage outcomes of postsecondary graduates in Minnesota.

Higher Education Pays: But a Lot More for Some Graduates Than for Others

Prospective college students need sound information about where their educational choices are likely to lead. This report indicates that some graduates with associate's degrees outearn those with bachelor's degrees in their first year, and finds what a person studies can produce higher earnings than where he or she studies.