Washington, D.C. – Schools with the highest percentage of black students have the lowest black student achievement test scores, particularly among black males, and the widest achievement gaps between blacks and whites, a new federal study finds.

The study, conducted for the U.S. Department of Education’s National Center for Education Statistics by the American Institutes for Research (AIR), offers a new take on the stubborn black-white achievement gap. Examining the performance of nearly 100,000 8th graders on the mathematics portion of the 2011 National Assessment of Educational Progress (NAEP), the study found a wide disparity in average racial composition in the nation’s schools. The average black student attended a school that was almost half black, while the average white student attended a school that was about one-tenth black. Eighty percent of white 8th graders attended schools that were 0 to 20 percent black; only a quarter of black 8th graders attended such schools.

“In recent years, there has been increasing attention paid to resegregation’s effects on the black-white achievement gap,” said George Bohrnstedt, an AIR Institute Fellow and one of the report’s authors. “While our study cannot show a causal link between racial isolation and achievement, schools with the largest percentage of black students are showing troubling results, particularly for black males.”

Schools with the highest concentration of black students—those with 60 percent or higher—were mostly in the South and in cities, the study found.

AIR researchers took into account various factors known to be correlated with achievement, including teacher credentials, student teacher ratios, and whether students qualified for the National School Lunch Program or had disabilities. Even when these elements were factored in, black male achievement was significantly lower in schools with the highest concentration of black students. At such schools, the report found, the achievement gap for males was 25 points, compared to a gap of 17 points in schools that were less than 20 percent black.  For young women, the black-white achievement gap was not statistically wider in schools with the highest percentages of black students (15 points) than in schools with the lowest percentages (13 points).

The report’s findings come amid signs that the black-white achievement gap has changed little in the past decade. The overall black-white achievement gap on the NAEP 2013 Mathematics Grade 8 Assessment was 31 points, roughly equivalent to three years of schooling. While it was not the focus of this report, NAEP data show that gap has remained unchanged from 2007 to 2013.

The authors’ more specific focus stemmed from “a need to further understand how achievement may be associated with increased racial isolation for black students,” according to the report. For example, a 2014 study by the University of California-Los Angeles of federal education data found beginning in the late 1980’s a reversal in a decades-long trend toward desegregation. Since then, those researchers found, attendance at schools with 90 percent or more black students has increased by roughly 10 percent among blacks in the South and the West.

A key assumption guiding the new NCES report is that the percentage of black students in a given school is a potential indicator of patterns of segregation or resegregation. The report noted that “racial segregation may have a negative association with the quality of teaching and learning” in such schools.

In a separate analysis, the report’s authors used the relationship between achievement and a school’s concentration of black students to determine whether the achievement gap was primarily between schools (related to the concentration of black students) or within schools (related to whether or not a student is black). This issue informs approaches to narrowing the gap, including decisions about allocating such key resources as technology, updated textbooks and qualified teachers.

“Black and white students attending the same school account for more of the achievement gap than black and white students attending different schools,” said Sami Kitmitto, an AIR principal researcher and a co-author of the report. “Given that about half of the achievement gap appears within-schools, this suggests that resources might best be targeted toward struggling students within schools wherever those students are found.” 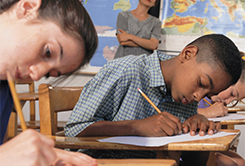 With recent concerns about the growing resegregation of schools, this analysis sheds light on the relationship between the Black-White achievement gap and the demographic makeup of schools. Accounting for factors such as socioeconomic status and other characteristics, the analysis finds that black student scores were lower, and achievement gaps wider, in mostly black schools. 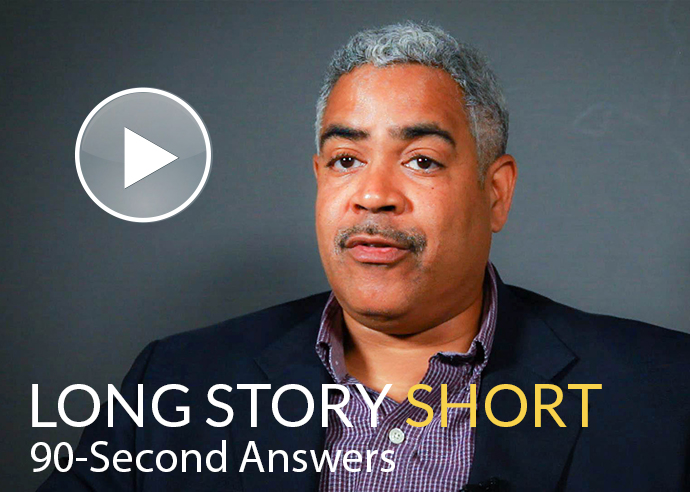 Disparities persist in educational achievement for students of color and low-income students. In this video interview, Darren Woodruff, principal researcher at AIR, explains how schools can create a climate to help reduce the achievement gap and help all students learn.
Share