The launch of end-of-grade tests for about 1.7 million students in Honduras marks a major achievement for the nation’s education system, and the latest milestone for Improving the Impact of Student Development in Honduras, also known by its Spanish acronym, MIDEH. It is the first time in the country’s history that student academic performance is being evaluated at the census level. 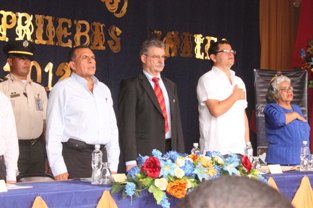 To celebrate and kick off the tests, the president of Honduras, Porfirio Lobo Sosa, and his cabinet visited a school in the colonial town of Comayagua on November 27, 2012. In previous years, performance assessments were conducted with samples consisting of a few hundred schools. The current assessment is taking place in more than 13,000 public schools for students in grades one through nine.

President Lobo and his cabinet also signed an executive decree that made annual end-of-grade assessment of student performance compulsory. Student evaluations will be extended to include students in grades 10 and 11 in 2013.

“[T]he inherent value of this evaluation should be seen as equally or even more important than building a new school, providing desks to students, or even buying new books.” – Dr. Marlon Escoto, Honduras Minister of Education

The Minister of Education, Dr. Marlon Escoto, highlighted the importance of the assessment, saying the executive decree “is vital for our children´s education; the inherent value of this evaluation should be seen as equally or even more important than building a new school, providing desks to students, or even buying new books.”

President Lobo praised the minister for his role and thanked Honduran non-governmental organizations, citizen volunteers, and the international donors for their contribution, “Today is the beginning of a process that will allow teachers and school directors to measure their student’s competencies - the ministry of education and the nation have left complacency behind, and with substantial support from civil society and the international community, we are doing what is right.” Both President Lobo and Dr. Escoto specifically acknowledged the MIDEH Project role in providing critical technical assistance to the development of a national education evaluation system.

Since 2004, AIR has played a significant role in supporting the Honduran Ministry of Education to build and sustain a national standards-based educational reform program to improve education quality in pursuit of the goals of Education for All, the global education initiative to provide quality basic education, which include improved student academic performance in Spanish and math and increased completion rates. AIR has guided local stakeholders during every stage of the process with strategic advice and technical support including the following:

The 2012 census level tests are a concrete result of years of ongoing effort from AIR and its partners to build institutional capacity and a national culture of evaluation in Honduras. The MIDEH Project operates with generous support from USAID.