Dr. Myers joined AIR in 2006 as senior vice president and director of the Education, Human Development and Workforce division. Since he was named the institution’s sixth President & CEO, AIR has grown its portfolio of research and technical assistance work; has strived to make evidence more accessible and usable by researchers, policymakers and practitioners; and has deepened its commitment to diversity, equity and inclusion (DEI) both internally and in the work it does for and with clients and communities. In 2021, as the institution celebrated its 75th anniversary, AIR committed to its mission by launching the AIR Equity Initiative, a $100+ million investment in research and technical assistance to address the underlying causes of systemic inequities and to increase opportunities for people and communities.

A leading authority on the design, implementation and analysis of experimental studies of education programs, he has played a major role in some of the largest randomized control trials on education conducted in the United States. He has directed policy analyses of elementary, secondary, postsecondary, and adult education issues, including such diverse topics as the effects of compensatory education programs and school vouchers on student achievement, the impact of high school achievement on college enrollment of black and white youth, and differences in learning trajectories of children as they progress through elementary school. He also led an impact study of adult literacy programs. 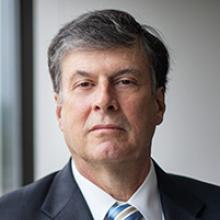