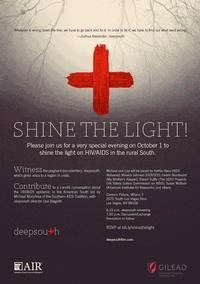 On Monday, October 1st, AIR will convene a special evening of reflection, discussion, and engagement in order to shine the light on the state of HIV/AIDS in the American South.

Guests will gather at Caesars Palace in Las Vegas where service providers, advocates, policy makers and researchers will convene for the United States Conference on AIDS. USCA is the largest annual AIDS-related gathering in the U.S., bringing together thousands of workers from all fronts of the HIV/AIDS epidemic—from case managers and physicians, to public health workers and advocates, people living with HIV/AIDS (PLWHAs) to policymakers—to build national support networks, exchange the latest information and learn cutting-edge tools to bring an end to the HIV/AIDS epidemic (NMAC, 2012).

Shine the Light! guests will view deepsouth, a poignant new documentary that showcases women and men living with and fighting HIV in the rural South, and addresses some of the broader social and political issues that plague this region in crisis.

The post-film discussion will be led by Michael Murphree of the Southern AIDS Coalition, with deepsouth director Lisa Biagiotti. They will be joined by a panel of discussants as they delve into the intersection of issues raised by the film: poverty, race, class, education, justice, stigma, and access to affordable, quality, and compassionate care. Gilead and the MAC AIDS Fund supported this program.

To RSVP for the event, go to bit.ly/shinethelight.

For more information about Shine the Light!, contact Danielle Lapierre at dlapierre@air.org.