Signed into law by President Bill Clinton shortly after he took office in 1993, the Family Medical Leave Act (FMLA) marked the first time the U.S. offered job-protected leave at the national level. As the law turned 20 in February, AIR and ZERO TO THREE hosted an event looking at the law’s impact on workers so far and ways to improve family leave policies going forward.

Congresswoman Rosa DeLauro was the featured speaker, with presentations on paid parental leave given by AIR Principal Researcher Susan Muenchow and University of Virginia Professor of Public Policy and Economics Christopher J. Ruhm. Muenchow and Ruhm are co-authors, along with developmental psychologist Edward Zigler, of the book Time Off With Baby: The Case for Paid Care Leave.

“When you consider the inspiration for the Family Medical Leave Act, baby leave, in some ways the bill has not been all that much a success,” said Muenchow. “Only one-third of mothers who have been employed for over a year qualify. And many of those who are eligible for leave cannot afford to take it because FMLA is unpaid.”

Muenchow, an early childhood expert, said when parents do not spend adequate time with their infants, it can undermine parent-child attachment, the child’s formation of trust and the child’s ability to learn, exercise self-control and form positive relationships. In addition, Muenchow stressed there are risks to the child’s health: The child may be breast fed over a shorter period and have fewer well-baby visits and immunizations.

As keynote speaker, DeLauro stressed that improving FMLA would help more people balance their competing priorities at work and at home. “FMLA cannot remain static, and we have a lot of work to do. We need to modernize and expand it, lower the employer-size threshold, reduce the tenure requirement [and] expand eligibility. Simply put, we need to pass paid leave. It shouldn’t be stagnant.”

NPR Senior Washington Editor Ron Elving, who served as the event’s moderator, walked guests through the legislative history of FMLA from its introduction to Congress in the mid-eighties to its eventual implementation by Clinton. Although the bill was a groundbreaking feat, “there were a lot of exclusions on the bill, something like 40 percent of the people living in the country were not going to be eligible because of the size of the business they worked for.  But the main thing that was seen as deficient was there was no provision whatsoever for paid leave,” he noted.

Additional speakers included Matthew Melmed, executive director of ZERO TO THREE, and Vicki Shabo, director of work and family programs at the National Partnership for Women & Families, who said a paid leave provision is an important next step to make FMLA more accessible to working American families.

During the panel, Muenchow and Ruhm presented their recommendations for expanding FMLA to include a paid leave provision: 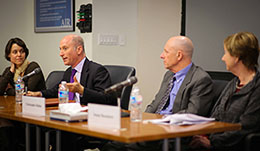 “We’re not saying this is the right proposal, but it’s a way to approach it,” said Ruhm. “This seems like a huge change, but it is far less generous than what you see in most other countries. We designed it to what’s consistent with international consensus on what’s needed to promote child development and enhance market labor outcomes and also to minimize cost to employers and administering operational cost to government.”