The Center on Aging at AIR, directed by Institute Fellow and Center director Marilyn Moon, held a kick-off conference on May 5, 2014. The event, which focused on how researchers can engage in the policymaking process, encouraged participants to think creatively, constructively, and in concert.

For many researchers, work is done when the report and its executive summary are completed and perhaps published in a professional journal. But since applied research, by definition, should speak to real-world issues and situations, shouldn’t it also be shared with as broad an audience as possible?

What themes emerged from these presentations?

As for capturing policymakers’ attention, the four presenters demonstrated the contribution that clear and convincing data can make and the importance of individual researchers’ passion and commitment.

Judy Feder’s keynote on what policy engagement means and how to engage more effectively was informed by her deep expertise in health and long term care issues, as well as her experience as a political appointee in the Clinton Administration and executive director of the Pepper Commission, a Congressionally mandated body that examined how to achieve health and long term care reform. Using concrete examples from long term care, she offered key lessons:

Our panelists strategized on how their own recent research could inform discussions of aging. How might Social Security and Medicare be changed and what should we expect from these programs in the future? Melinda Buntin from Vanderbilt University addressed why spending on Medicare has slowed and whether we could expect it to continue, drawing on her path-breaking research at RAND and her public service as chief economist at HHS, where she coordinated the expansion of electronic health records and other health IT, and at the Congressional Budget Office, where she and her colleagues produced a key study on Medicare spending. Her comments, reflecting her own views, were as follows:

Monique Morrissey from the Economic Policy Institute presented findings on the inequality of resources that people bring to retirement, drawing on a chartbook that she produced on retirement resources, her research on retirement age and retirement-related tax incentives, and her work at the AFL-CIO and the Financial Markets Center. She emphasized the inequality of savings in such vehicles as 401Ks and the ways tax policy contributes to the problem: 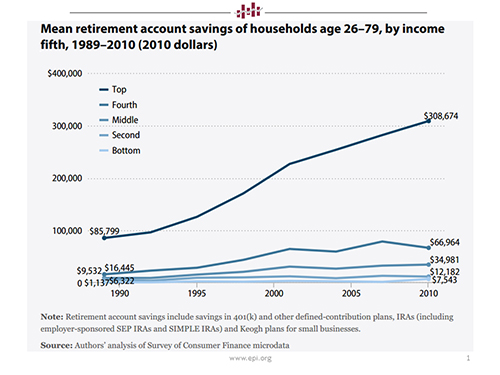 Teresa Ghilarducci from the New School is a seasoned academic researcher who also serves on boards and advisory panels for unions, state governments, and others on a range of retirement issues, and promotes proposals for improving pensions through the creation of Guaranteed Retirement Accounts. She spoke about her new research on time spent in retirement, pointing out that in the past 30 years, the lifespan of high-income, highly educated older white males has increased the most, and that men have more retirement time than women.

The Changing Economic Status of Seniors

Recently, attention has focused on who is prospering in the challenging economic times the U.S. has faced in this early part of the 21st century. Are seniors faring better than younger families? AIR expert Marilyn Moon discusses the issue.
Event Information