Ask Me Anything: Mark S. Schneider on the Value of a College Education 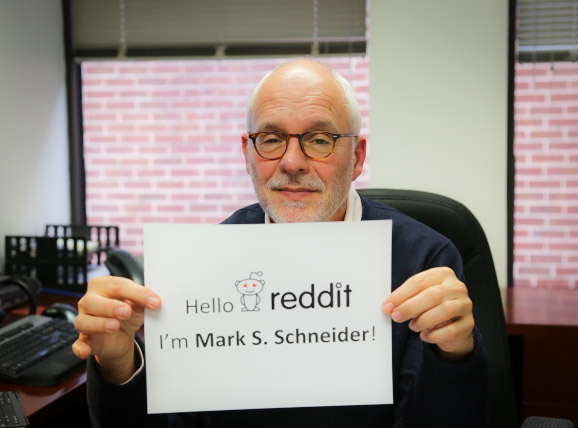 How did higher education get so expensive? Who should be counseling prospective college students? Do bachelor's degree holders have relevant job skills? AIR Vice President and Institute Fellow Mark Schneider recently answered these and other questions during an Ask Me Anything session on Reddit. Previously a National Center for Education Statistics commissioner, Dr. Schneider has spent years studying the value of postsecondary education, including its return on investment for taxpayers and the earnings of college graduates. He is also the president of College Measures. Here are the highlights from the AMA session he hosted.

Do you think the bachelor’s degree is the new high school diploma?

The reign of the bachelor's degree may not last forever

The bachelor's degree is the most frequently awarded postsecondary credential in the country—and it is the degree that most people think of when they say college education. But the costs and rewards for the bachelor's degree are under great scrutiny. Why does it take so long? Why does it cost so much? What are students actually learning? What are they actually earning as a result of their education?

The reign of the bachelor's degree may not last forever.

What is your view on the proposed college ratings framework? Do you think it will really improve transparency, equity and accessibility in higher education?

No, no, and more no. I don't have great hopes for it. We need data on programs as well as institutions (there is far more variation in student success across different programs than there is across institutions). And the U.S. Department of Education is not going down that route. In turn, the PIRS system (the Postsecondary Institutional Rating System, the formal name of the ratings) will be just hitting a small piece of what students need to know.

I like the fact that the consequences of the rating system (coupling these performance metrics to Title IV student aid) is not supposed to go into effect until after the administration leaves office and will require congressional approval. What do you think the chances of that happening?

The government also doesn't have a great track record in making things that are consumer friendly. If it can get better measures, my hope would be that companies (profit or not-for-profit) will be able to do better in building more useful tools.

How did the cost of higher education get so expensive?

The argument about the costs of postsecondary is, as you know, intense. Lazy rivers, climbing walls, luxury dorms, etc. are often cited as contributors to high costs. The growing legion of highly paid administrators is another favorite. And the role of federal aid that subsidizes costs is yet another cited factor. Finally, I don't think you can ignore the fact that many campuses compete on price—not the way that firms do (getting prices down) but just the opposite: getting prices up to show that your school is a quality school.

Bottom line: We agree that college costs have increased way too much—but there is less agreement about the actual causes.

Are there some measures you’d like to get that some colleges and universities—particularly private ones—are reluctant to disclose?

There are only a handful of measures I think that students need to know when they think about college.

Someday, we may even be able to add a sixth point: What have I learned? But the testing regime that this will require is another can of worms that I will leave for others.

With answers to my five questions, we can do an awful lot of powerful analysis—useful to students, families and state/federal governments. And most of these measures need to be at the program level, not the school level.

In my experience, company executives have studied at less "prestigious" universities than their employees. You mentioned that where you studied matters less than people think, but I have not found that to be true for my generation. Can you explain why I might be seeing a divide between generations and if the "where" factor actually does matter less for those in their twenties?

About 75 percent of American students go to regional campuses

Yes, there are marquee universities (the Ivy League and the like) where reputation can open many doors. And I tell anybody who asks if you can get into any of the, say, 100 top brand name schools in the nation, you should go. But about 75 percent of American students go to regional campuses (often call "compass campuses" because they often have north, south, etc. in their names). These schools do not have national reputations, although the best ones may have state or regional ones. This is where what you know and what you can do becomes more important. And there's plenty of evidence that what that means is (literally) not rocket science. Can you manage complex data bases? Can you present material in a logical, coherent manner? Can you write English sentences and understandable memos? Much of this is really mastery of the tools embodied in Microsoft Office.

Sure, learn to parse Proust, if that's where your passion takes you. But make sure you have a set of marketable skills if you want a job and a living wage.

How do you feel about the gainful employment rules that are intended to measure the effectiveness of some programs of higher education?

There are some technical problems in how the U.S. Department of Education structured the rule—but the biggest problem is that the rule should be applied to all programs, regardless of the tax status of the college or university offering the program. Far more students attend public institutions than private not-for-profit or for-profit institutions. Why should students in these programs not know about their employment and wage prospects?

I think that the government (both state and federal) has the responsibility of getting the data out into the public sphere. And I think government can help make the data understandable.

Counseling is a challenge. Most high school counselors are not trained in the finances of college education or college going in general. And the tools they have at their disposal tend to be primitive. We need to help them improve—but, ultimately, students are the ones that are making the decisions and we have to help them become more financially literate about the choices they are making. They should know what the likely wage outcomes of their postsecondary choices are—because that determines what level of debt will be manageable. Don't borrow $100,000 if the expected wages for your major are $25,000!

Is a liberal arts degree better or worse in the job market or does it even matter?

What is your favorite type of pie?

When I was an undergraduate, I belonged to a fraternity, whose name was Phi Epsilon Pi.

We were trained to answer your question with that name. That was many years ago, and I no longer have that reflex responses. But I love so many different types of pie that it's hard to choose one. It's like my children: I love them all the same.

College Measures worked with state governments to help identify higher education credentials with high return on investment. Our work focused on jobs that present the best opportunities for students to launch exciting careers and on skills that students need to get those jobs, with the goal of helping them find ...
Event Information