Vulnerability for Households with Persons with Disabilities and HIV/AIDS in Chongwe, Zambia

Little research has been done to understand the interplay between HIV/AIDS and disability at the household or community level, either nationally or globally. In Zambia, the country of focus of this research, there are no published studies on the prevalence of HIV/AIDS within the population of individuals with disabilities, and to further complicate matters, no firm data on the prevalence of disability in the Zambian population. Despite the paucity of research linking HIV/AIDS and disability, it is believed that barriers and discrimination faced by people with disabilities, and especially by women with disabilities, reinforce the drivers of HIV/AIDS and poverty in ways that influence and even exacerbate household vulnerability.

The ENGAGE project, implemented by AIR and funded by US Agency for International Development, is working in Zambia in partnership with a program led by World Vision (WV) called Reaching HIV/AIDS Affected People with Integrated Development and Support (RAPIDS) to introduce a disability dimension in a “mainstream” HIV/AIDS program. The ENGAGE and RAPIDS teams determined that in order to define how to address disability within the context of a large HIV/AIDS project, it was first necessary and appropriate to research the interplay between disability and HIV/AIDS at the community and household level.

This pilot study, which focused in the Chongwe district, 60 kilometers outside the capital of Lusaka, found that disability was present in over 35.7 percent of HIV/AIDS vulnerable households and that people with disabilities were less likely than their non-disabled peers to seek care and support from hospitals and clinics, to attend school, or engage in productive economic activities.

The study also found that vulnerability and household response behaviors are bidirectional. For example - primary caregivers are often burdened with their responsibilities, but are nevertheless in positions of power in the household. Similarly, individuals with often need the care provided by caregivers, and as a result of the relationship with the caregiver and their disability are less independent. The relationship with the caregiver – characterized by power in one direction and dependency in the other – can also render an individual with a disability, at times, more vulnerable to abuse and/or neglect.

This pilot study is only the first of many necessary steps to understand the complex and little researched relationship between HIV/AIDS and disability.

Vulnerability for Households with Persons with Disabilities and HIV/AIDS in Chongwe, Zambia 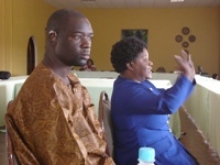 The USAID-funded ENGAGE Project is introducing inclusive education for children with disabilities in Bagh, Pakistan. Twenty-five teachers in Bagh are participating in Pakistan's first project to introduce inclusive education training in a public school setting.