Up for Vote #5: Rethinking the Role of Pre-K in ESEA Sequel

This is the 5th blog post in the Up for Vote series focused on Congressional action to reauthorize the framework legislation for federal education policy. Our recommendations are based on AIR’s research. Here we focus on issues affecting the Elementary and Secondary Education Act (ESEA), specifically Early Childhood Education.

As ESEA turns 50 this month, the time is ripe to rethink whether the “E” in the Elementary and Secondary Education Act is the best place to start. Robust research reveals that students are most successful when they get a good jumpstart prior to elementary school.

How the latest ESEA narrative will play out isn’t yet clear. The Senate and House are working on separate versions of an ESEA rewrite, and Department of Education Secretary Arne Duncan, the Council of Chief State School Officers and a coalition of 19 advocacy groups have all made separate pitches to spotlight preschool in the new bill. Duncan went so far as to say that if he had just one more federal dollar to spend on education, he would use it on early childhood.

Meanwhile, Congressional leaders are turning their backs on a more expansive federal role in education, so early childhood education’s champions face an uphill battle. The Senate bill, marked up last week, has more modest goals, specifying that states, districts, and schools can use ESEA dollars from Title I, Title II, and Title III on preschool. An amendment would establish an early learning grant program to strengthen and expand access to high-quality early childhood programs for children of low-income families.

But even if ESEA stops at that, state and local leaders will need guidance on what works so they know where to direct resources.

The smart money is on child development programs for kids age four or younger. Children in these programs make strides in language, pre-math, and science skills. But the wide-ranging effects of attending go much deeper. Longitudinal studies show that such programs improve school attendance in elementary school, reduce grade retention, and even curb juvenile crime. Nobel laureate economist James Heckman concludes that early intervention programs for disadvantaged children pay better returns than remedial programs for older children.  Children from low-income families benefit most, but attending a quality preschool program is associated with higher achievement in elementary school for all income groups.

Advocates for universal preschool often call for small group sizes or higher teacher qualifications, such as attaining a bachelor’s degree. While high-quality preschool programs often contain these features, research shows that alone, they are not enough to ensure greater gains for children during their preschool years. Teachers working with 3- and 4-year-olds require special skills. Besides fostering higher-order thinking skills in, say, early math and language, they also need to understand how to embed play with learning. That means thoroughly understanding child development and knowing how to teach across multiple domains in a warm and engaging manner. The Senate bill offers a nod in this direction, allowing states, districts, and schools to direct Title II funds to the recruitment and professional development of preschool teachers and principals.

At its heart, a commitment to quality preschool comes down to educational fairness. For some children, missing out on preschool means starting out behind and finding themselves in a frustrating cycle of catch-up. It’s an argument that has led judges in several states to mandate preschool as part of school equity lawsuits.

But income eligibility rules for public preschool programs are often arbitrary. Students in high-poverty areas where few families can afford quality private school often can’t get spots. AIR’s work with First 5 California, which supports the improvement and expansion of preschool, confirms the utility of allocating resources partly to those in zip codes with the greatest unmet need. Similarly, New Jersey’s Abbott Program provides free high-quality preschool to all 4-year-olds in the state’s 31 poorest school districts.

A new competitive grant program and greater flexibility with federal funds are not enough to combat these systemic problems. For example, only 2.5 percent of children attending Title I-funded education programs were counted as pre-K students, according to the most recent Department of Education statistics. So long as the law doesn’t require preschool, early childhood programs may fall victim to the notion that what does not get measured does not get funded.

Historically, preschool has been slighted because states and districts spent federal resources on other high-demand programs. Even though those demands persist, greater flexibility is a healthy step toward an investment that will benefit children long after they start elementary school.

Susan Muenchow is a principal research scientist in the education program at AIR.

Up for Vote Series: Exploring Reauthorization

Our Education Policy Center's Up for Vote blog series explores much needed Congressional action to reauthorize the framework legislation for federal education policy. Our recommendations reflect years of research and direct work with states and districts to improve schooling.
Topic:
Education, No Child Left Behind (NCLB)
10 Dec 2014
Longform Essay 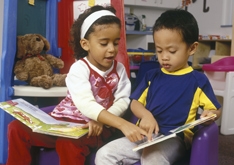 What to Look for in a High Quality Preschool