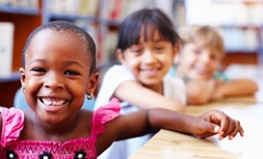 What Do Transitional Kindergarten Classrooms Look Like in the Third Year of the Program’s Implementation?

California’s Kindergarten Readiness Act of 2010 established transitional kindergarten (TK), the first year of a two-year kindergarten program for students affected by the change in the birthdate cutoff. This fifth short report in a series highlighting findings from the Study of California’s Transitional Kindergarten Program focuses on what we have learned about the structure, teachers, and instruction in TK classrooms in the 2014–15 school year.
Topic:
Education, Child Welfare, Early Childhood and Child Development