A Tale of Two Districts: A Comparative Study of Student-Based Funding and School-Based Decision Making in San Francisco and Oakland Unified School Districts 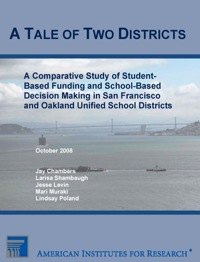 As educational budgets tighten in response to the current fiscal crisis facing public services, state policymakers continue to debate ways of improving the adequacy and equity in the approaches to distributing funds to schools and increasing the efficiency of how schools use these funds. To meet these goals, increasing attention has been paid to policies that provide school administrators with greater autonomy in how they allocate their resources and that distribute additional resources to schools on the basis of the needs of the students they serve.

One such policy that a number of districts have adopted in various forms over the past decade is a student-based funding (SBF) policy. Sometimes referred to as a weighted student formula policy, SBF policies typically include the following three dimensions:

Districts have used several variations on this policy, depending on their goals and their focus. The general theory is that school staff, parents, and community members are in a better position than more centralized authorities to ensure that resources align with the needs of the students. In addition, by allowing students and families a choice of schools, SBF policies introduce market forces; in other words, school administrators may be motivated to provide programming that will attract parents and children. SBF policies replace the traditional district model, in which the district retains control over both the allocation and the expenditure of resources at the school site, and allocates resources to cover schools’ operating costs largely on the basis of the number of students enrolled at each school.

Though the number of districts with SBF-type policies has grown, the literature on the implementation and possible impacts of these policies is limited. To address this, this report describes the implementation of SBF policies in two California school districts—San Francisco Unified School District and Oakland Unified School District—and addresses the following research questions:

This study is not an evaluation of SBF policies in California. Our goal is to describe and compare SBF systems in two case study districts, to report the perceptions of key constituencies on these policies, and to present data on the patterns of resource allocation before and after implementation.