On October 8, 2005, a magnitude 7.6 earthquake struck the northern areas of Pakistan and Azad Jammu & Kashmir (AJK). At the time of the earthquake, school was in session, and over 18,000 students and 850 teachers were killed. Approximately 7,700 schools were destroyed. In response to the devastating earthquake, the U.S. Agency for International Development (USAID) made a commitment to the government of Pakistan to help "build back better" the education system and restore livelihoods in earthquake-affected areas. The work was described as building back a better system than what had existed at the time of the earthquake because prior to the earthquake the public education infrastructure was largely ineffective. Education departments lacked skills in key areas of education management; teachers lacked knowledge of interactive, activity-based learning and student-centered teaching methodologies; and while School Management Committees and Parent-Teacher Councils existed in many schools, they were often inactive or weak.

On July 31, 2006, a consortium comprised of the American Institutes for Research and its partners, the International Rescue Committee, Sungi Development Foundation, and the National Rural Support Foundation, was awarded the Revitalizing Innovating Strengthening Education (RISE) Project to support USAID’s reconstruction efforts in the earthquake-affected areas. RISE began its work in Mansehra, Khyber Pakhtunkhwa (KPK) and Bagh, Azad, Jammu & Kashmir (AJK). Sarhad Rural Support Program joined the consortium in 2007, and at the request of the AJK government, USAID expanded RISE coverage to include the districts of Muzaffarabad and Poonch in 2007. RISE ended on August 31, 2010 having improved educational capacity and quality at all levels of the education system including hands-on training and support for 196 district education managers, training and support for over 10,316 teachers, and training and support for over 17,600 community members. Perhaps most importantly, RISE benefitted approximately 198,000 students in Mansehra, Bagh, Muzaffarabad, and Poonch districts over the life of the project. 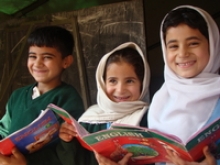 In response to the October 2005 earthquake that devastated the Azad Jammu Kashmir and Northwest Frontier Province regions of Pakistan, USAID funded the project Revitalizing, Innovating, Strengthening Education (RISE) to support the Government of Pakistan's mandate to "build back better" the education system in earthquake-affected regions.