Public deliberation is a unique way of convening a diverse group of citizens to consider an ethical or values-based dilemma and then weigh alternative—often competing—views. New research from the American Institutes for Research (AIR) indicates that public deliberation is an effective way to gather informed public views on complex health policy issues, such as the role of medical evidence in treatment decisions. Rather than “top-of-mind” views typically collected in surveys and focus groups, public deliberation is designed to capture in-depth and informed lay 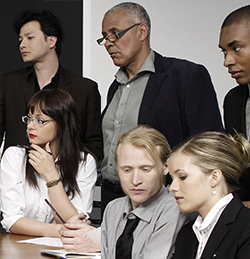 Public deliberation rests on the democratic principle that important societal decisions—particularly issues involving competing values and complex trade-offs—are best made by policymakers in partnership with an informed public. Given the U.S. health care system’s complexity and the inherently emotional and personal nature of health care, public deliberation shows great promise as a way to obtain thoughtful and constructive public input to help guide policy decisions on complicated health care issues.

Growing evidence indicates that informing and engaging the public—both as patients and as citizens—can help achieve better care and better health. Just as partnerships between health professionals and patients and families can contribute to better direct care decisions, partnerships between policymakers and citizens can help guide decisions on complicated health policy questions. Public deliberation is part of a broader public and private effort to use public engagement to achieve the triple aim of better patient experiences, better health and lower costs.

With roots dating to ancient Greece, public deliberation is grounded in the democratic principle that an informed public should shape the policies and decisions that affect citizens’ lives and well-being. Deeply held values and beliefs often underlie debates on health care issues, such as balancing the role of medical evidence vs. personal preferences in treatment decisions, requiring people to have health care coverage, and deciding who should pay for what care. Public deliberation emphasizes balancing individual needs and wishes with broader societal concerns.

Public deliberation has three main components: 1) educating participants about an issue, usually through neutral, objective written materials or conversations with experts; 2) ensuring balance by considering all sides of an issue; and 3) encouraging participants to keep broader societal concerns in mind along with their individual points of view. There are multiple public deliberation models and methods, ranging from small, in-person meetings to larger online gatherings. Methods also can vary a great deal—for example, in intensity, with sessions lasting from a few hours to several days; the number of sessions; and the extent of educational materials and experts used to provide unbiased information.

Between August and November 2012, AIR convened 76 public deliberation groups in four communities: Chicago; Sacramento, Calif.; Silver Spring, Md.; and Durham, N.C. The communities were selected to ensure a diverse sample in terms of racial, ethnic and socio-demographic background, with special attention to including members of three AHRQ priority populations: Hispanics, African-American women and elderly people. The participants all considered the same health policy question: “Should individual patients and/or their doctors be able to make any health decisions no matter what the evidence of medical effectiveness shows, or should society ever specify some boundaries for these decisions?” Before and after taking part in the study, all participants’ knowledge and opinions of medical evidence and comparative effectiveness research were measured.

AIR researchers also found that public deliberation is an effective way to gather public input from diverse groups, including African Americans, Hispanics and people with less education. An AIR analysis published in the February 2015 Journal of Health Care for the Poor and Underserved found that regardless of race, ethnicity or educational attainment, participants showed similar increases in knowledge following deliberation. Both the Social Science & Medicine study, titled “Effectiveness of Public Deliberation Methods for Gathering Input on Issues in Healthcare: Results from a Randomized Trial,” and the Journal of Health Care for the Poor and Underserved study, titled “Deliberation: Obtaining Informed Input from a Diverse Public,” are available online.

The study findings indicate that public deliberation is an effective way for policymakers to both engage citizens in complicated health care issues and "see around the corners" to better understand and anticipate how public attitudes might change as people learn more about specific issues and discuss them.

Established in 1946, with headquarters in Washington, D.C., the American Institutes for Research (AIR) is a nonpartisan, not-for-profit organization that conducts behavioral and social science research and delivers technical assistance both domestically and internationally in the areas of health, education, and workforce productivity. For more information, visit www.air.org.

AIR’s Center for Patient & Consumer Engagement is committed to transforming health care delivery in ways that truly put patients and families at the center of care. Greater engagement of patients and families in direct care decisions, health care organizational design and governance, and public policy is key to achieving better care, better health and lower costs. Learn more about the Center’s conceptual framework for patient and family engagement >>

Public deliberation—a way to capture in-depth perspectives on controversial issues—effectively provides informed public views on complex health policy issues, such as the role of medical evidence in treatment decisions, according to a randomized controlled trial conducted by the American Institutes for Research and published in the May edition of the peer-reviewed journal Social Science & Medicine.