One section of the National Center for Education Statistics’ newly released Projections of Education Statistics to 2022 homes in on enrollment in higher education. This piece of the 41st edition of NCES’ annual forecast of future trends in important education indicators is a virtual storehouse of information about enrollments in the nation’s colleges and universities since 1997 and a guide to where the nation is likely to be in 2022.

Two trends shown in the charts below:

While the Bachelor’s degree is and probably will remain for the next decade the most commonly awarded degree in the United States, the number of associate’s and master’s degrees is increasing faster and the gap is closing.

This growth in both associate’s and master’s degrees may signal students’ desire for marketable skills that lead to good pay. For many students, the bachelor’s degree no longer represents that. 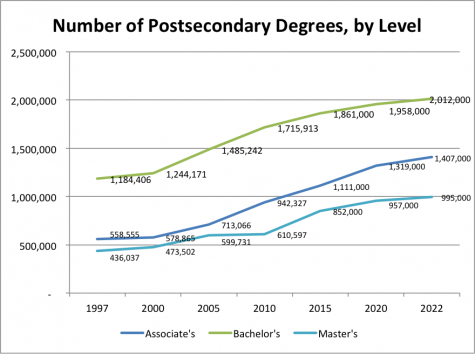 The exception is associate’s degrees: there, women’s enrollment is projected to drop from around 62% to 59% over ten years.

Google “the problem with boys” or “the problem with men” and you will get hundreds of thousands of hits. Lack of ambition, lack of discipline, lack of education—to name a few common themes. Now the perennially reliable NCES projections suggest that whatever problems have kept males from pursuing postsecondary education will not be resolved in the next decade. And campuses, many of which already struggle to maintain gender balance, will have an even harder time doing so in the coming years. 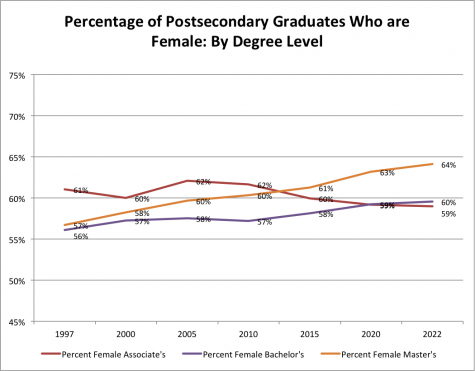