Min Ila: Summary of Education Results After the First Few Months of Implementation

Lebanon has one of the highest per-capita ratios of registered refugees in the world. Most Syrian refugees arrived with limited savings and have struggled to earn steady incomes to meet their families’ basic needs, such as food, health care, and shelter. This sudden influx has created an education crisis in Lebanon that affects Syrian and vulnerable Lebanese children.

In the 2016–17 school year, UNICEF Lebanon, in partnership with the World Food Programme and in cooperation with the Lebanese Ministry of Education and Higher Education, started Min Ila, a cash transfer program for displaced Syrian children in the governorates of Mount Lebanon and Akkar. The program is designed to address the income-related barrier to school attendance alongside existing interventions addressing non-income constraints.

This policy brief provides a summary of the preliminary education impacts generated by the No Lost Generation/Min Ila cash transfer program during the first few months of implementation. The Min Ila cash transfer substantively increased attendance rates for children in second shift schools in the pilot governorates of Akkar and Mount Lebanon—the schools within which the programme operates. While there is suggestive evidence that Min Ila increased enrollment in second shift schools, in line with administrative enrolment data that suggest higher enrolment in pilot areas, we are currently unable to definitively attribute this increase to the programme. The program impacts on school enrolment appear to be dampened by the limited capacity of second shift schools to register all of the children who wanted to enroll, hence also limiting the number of children who could register for the cash transfer.

The administrative enrollment data show that while enrollment increased 41% in 2016–17 in non-pilot governorates, enrollment increased 51% in pilot governorates, even given the supply capacity constraints. In short, more children go to second shift school overall, and of these children, those from pilot areas spend significantly more time in the classroom. These findings are preliminary. More analysis and administrative data are needed to gain a deeper understanding of the program’s effects. 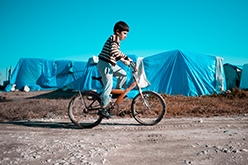 The sudden influx of Syrian refugees into Lebanon created an education crisis in Lebanon that affects Syrian and vulnerable Lebanese children. AIR and the UNICEF Office of Research–Innocenti are leading an independent impact evaluation of Min Ila, a cash transfer program for displaced Syrian children in the governorates of Mount Lebanon and Akkar., and designed to address the income-related barrier to school attendance alongside existing interventions addressing non-income constraints.

Cash transfer programs, growing around the globe since the mid-1990s, are a cost-effective way to improve the lives of poor households across many domains. Explore our work on cash transfers, programs that address poor households’ severe budget constraints and many investment needs ranging across education, health, household, and business.
Topic:
International, International Education, International Health and Social Protection, Water, Sanitation, and Hygiene