For people around the world, postsecondary education pays off over a lifetime. Among the benefits of going to college are higher employment rates, higher earnings, and healthier lifestyles. Yet many young people who enroll in college don’t make it to graduation day, despite strong interest and demand for postsecondary credentials.

Why is this happening? Data on college completion rates and financial aid from Education at a Glance 2019, an annual Organization for Economic Cooperation and Development (OECD) report, tell a story about the challenges of pursuing a college degree in the 36 OECD countries that account for 80% of world trade.

In a RISE webinar, AIR Principal Researcher Rachel Dinkes and Researcher Audrey Peek highlighted key findings and implications from the data. In her position supporting the National Center for Education Statistics, Dinkes serves as a U.S. delegate to three OECD education groups to ensure the accuracy and comparability of U.S. data in international studies. Peek specializes in postsecondary policy and administration and focuses on how students pay for and succeed in college. Sandy Baum, nonresident senior fellow at the Urban Institute, moderated the RISE webinar. They posed questions that could spur additional research into college completion.

On-time college completion is a struggle in every country.

OECD measures college completion rates by the “theoretical duration” of a bachelor’s or equivalent program for full-time students. In the U.S., bachelor’s programs typically last four years, while program duration across OECD countries ranges from three to six years.

Even with more time, many students leave college without earning a degree.

"[A]bout one-third of full-time students pursuing a bachelor’s degree in OECD countries do not complete their programs even within six—or more—years."

Still, about one-third of full-time students pursuing a bachelor’s degree in OECD countries do not complete their programs even within six—or more—years.

“Institutions could do a lot more to support students who want to go to college and earn a degree,” Baum said. “Some countries do really well at this. Some focus on high standards and preparation before students get to college.” Shorter postsecondary programs also may be easier for students to complete: 45% of students in OECD countries who entered shorter programs completed their studies on time.

Some students leave their programs after just one year.

So where are students after their first year of college? In France, for example, 11% of students who had enrolled in bachelor’s programs transferred to shorter programs by the beginning of their second year of study. “It’s important to understand what happened after year one so that institutions can help these students stay in school and gradaute,” Dinkes said.

In nearly every OECD country, students with at least one parent who had completed college had higher college completion rates compared to students whose parents completed high school or less.

In the U.S., there is a 25-percentage point gap between the on-time college completion rates of students with a parent who had completed college and those whose parents did not compete high school, which narrows only slightly to a 24-point gap with two additional years in college. This is one of the largest gaps among OECD countries.

“Many countries struggle with college completion, particularly when it comes to supporting students who are new to the higher education system,” Peek said. Cultural and social expectations factor into this. “Research shows that ‘navigational capital’ is related to completion. Immigrants may have to deal with language barriers, the trauma of displacement, and unfamiliar institutions and processes.”

“One issue everyone is worried about is equity—whether higher education institutions are providing opportunities for students from low-income backgrounds to rise up,” Baum added. “This is really important in the U.S.”

College completion and financial aid may be related, but it’s complicated.

OECD countries are all over the map in terms of tuition fees charged, tuition fees paid, financial aid, and loan forgiveness. In some countries, tuition varies depending on the degree field. Some countries peg tuition to expected labor market outcomes; others set tuition by institutional need. Students in some countries pay no tuition at all until after they graduate and start earning income. Countries also use different combinations of high, moderate, or low tuition and financial aid.

“There is room to do more, especially in the U.S.,” Peek said. “Students are people with complicated lives. Life events, such as family formation, the need to care for aging parents, job changes, changing interests, happen. There are many different reasons why students don’t complete college. Support for students in higher education institutions focuses on a number of different strategies, including coaching students to navigate the system, improving academic operational policies to give students more flexibility in their studies, and providing microgrants for students to pay that one bill they can’t make.”

“This is where policy becomes more relevant,” Dinkes added. “Tuition and fees may not be the strongest driver of college completion. Other social supports help students get through in other countries.”

Dinkes also pointed out limitations in the OECD data: The findings pertain only to full-time students pursuing bachelor’s degrees. Many students enroll in shorter degree programs, and many also attend part-time. Research on outcomes for these populations of students could yield a more comprehensive picture of college completion rates. 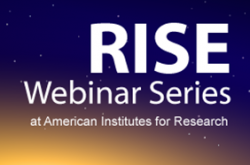 The Research on International Studies in Education (RISE) Webinar Series, organized by AIR, showcases research using data from international studies and promotes sharing and discussion about how data-based evidence can be used for improving educational outcomes.
Topic:
Education, International Comparisons in Education