In recognition of World AIDS Day 2012, AIR launched an interactive Facebook app on behalf of the Centers for Disease Control and Prevention (CDC) that lets users star in their own ads to raise HIV awareness and fight stigma surrounding the virus. The app is part of the CDC’s Let’s Stop HIV Together National Campaign that is being supported by AIR. 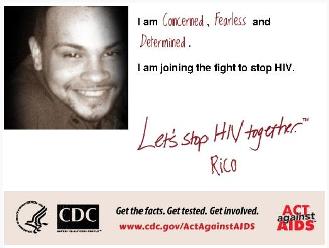 Facebook users can use the ad as a declaration that they support the fight against HIV. To generate the ad, the app asks for users to upload a photo and submit three words that describe them. Users can then share the ad on their Facebook profiles.

“Social media helps us to move from ‘communicating to’ to ‘engaging with’ people we are trying to reach,” said Lori Agin, principal communications specialist at AIR and project director of this work. “This Facebook app does exactly that, engaging people of varied backgrounds to share their personal commitments to the fight against HIV. This tool brings to life—through the faces of all kinds of people—the commitment, acceptance, and determination needed to stop HIV.”

The Let’s Stop HIV Together initiative gives a voice to people living with HIV and amplifies the message that stopping HIV requires the action of everyone in the community, not only those are infected. The campaign is unique in its range of individuals who are featured, including celebrities, well-known leaders and activists, and everyday people who are outside the HIV/AIDS community.

Let’s Stop HIV Together is part of a broader CDC campaign, Act Against AIDS, a five-year, multifaceted communication campaign with the goal of reducing HIV incidence in the United States. AIR has been and will be working on several Act Against AIDS projects with the CDC in the areas of strategic communications, campaign development and implementation, material development and dissemination, digital and social media efforts, partnership outreach, and conference and meeting support services.

AIR has supported CDC's Act Against AIDS campaign to raise awareness and combat complacency since before its White House launch in 2009. In 2012, AIR worked with CDC to develop a new national awareness and anti-stigma campaign, Let's Stop HIV Together.