The full text of this article appears in the October 16, 2019 edition of JAMA Psychiatry,

Personality phenotype has been associated with subsequent dementia in studies of older adults. However, neuropathology often precedes cognitive symptoms by many years, and may affect personality itself. Thus, it is unclear whether supposed dementia-prone personality profiles (high Neuroticism and low Conscientiousness) are true risk factors, or merely reflections of pre-existing disease.

Objectives: To examine whether personality during adolescence—a time when pre-clinical dementia pathology is unlikely to be present—confers risk for dementia in later life. We also tested whether associations could be accounted for by health factors in adolescence, or differed across socioeconomic status (SES).

Assessments: Ten personality traits were measured by the 150-item PT Personality Inventory. SES was measured by a composite based on parental education, occupation, and property ownership. Participants were also surveyed on demographic factors and height and weight.

Main Outcome and Measures: Medicare records were collected, with dementia diagnoses in the period of 2011-2013 classified according to the US Centers for Medicare and Medicaid Services (CMS) ICD-9-based algorithm. Cox proportional hazard models estimated the relative risk for dementia based on the ten personality traits, testing interactions with SES and adjusting for demographic confounders.

Conclusions and Relevance: The adolescent personality traits associated with later life dementia are similar to those observed in studies of older persons. Moreover, the reduction in dementia risk associated with a calm and mature adolescent phenotype was greater at higher levels of SES. Personality phenotype may be a true risk factor for dementia, preceding it by many decades and interacting with adolescent socioeconomic conditions. 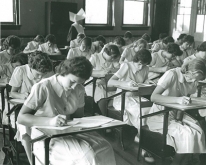 Project Talent is the largest, most comprehensive study of high school students ever conducted in the United States. Since its launch in 1960, researchers have continued to collect data on the original participants and now its data are helping AIR researchers study possible risk and protective factors of Alzheimer’s disease and related dementias. Project Talent Director and AIR Vice President Susan Lapham answered a few questions about the project, its history, and its potential influence.
Topic:
Education, Health, Aging, Healthcare Analysis and Evaluation