Heeding Early Signs to Keep Students on Track to Graduation

School teachers have been taking attendance since there were school teachers. It turns out that the simple act of noting who is missing—and then doing something about it in a systematic way—may be a key element in student success.

Report after report focused on high school graduation—from many different settings—shows that students who miss even a few days of school are more likely to fail courses and be on the path towards dropping out. And a recent data release from the U.S. Department of Education’s Office for Civil Rights showed that six million public school students across the country miss 15 or more days of school each year.

Other early signs that students might be in danger of not graduating on time include low grade point average (GPA), failed courses, or not earning enough course credits to be promoted to the next grade level. Early warning indicators can be used at all levels of education and for meeting other educational milestones. For example, a 2014 AIR research review shows that a high GPA (above a B average), the rigor of a student’s high school curriculum, and participation in Advanced Placement courses can signal future success factors, such as the likelihood that a student will enroll and persist in higher education.

But identifying at-risk students is only the first step. Knowing that a student is off track is not the same as knowing why that student is at-risk or struggling. Early warning indicators are symptoms of deeper problems. A student who doesn’t show up for class, for example, might be sick or bullied, have problems at home, or be disengaged from school altogether.

What can educators do? One approach gaining attention is an early warning system (EWS), which guides school-level stakeholders through a systematic process for identifying, diagnosing, and supporting at-risk students. An EWS is an approach to dropout prevention recommended by the Institute of Education Sciences Dropout Prevention Practice Guide. Here’s how it works:

This approach allows schools to quickly address students who are showing signs of going off track and to identify which interventions and support services are most effective.

The first available rigorous evaluations of the implementation of an EWS are underway; the preliminary findings suggest that, properly implemented, early warning systems work to get students back on track. More research on implementing EWS will be available soon, including the results of a randomized control trial being conducted by AIR on behalf of the REL Midwest.

There are several guides on how to establish and implement an early warning system, including two guides from AIR, written for the National High School Center—one on implementing an EWS in high school and the other for middle grades.

The Every Student Succeeds Act, 2015 requires states to identify high schools with graduation rates below 67 percent for an intervention. An early warning system is an intervention high schools can use to address the academic performance and well-being of students and improve graduation rates and other educational outcomes for the school. By taking action early for the students most likely to get off track, schools can address disparities and make a difference in young people’s lives before it’s too late.

David Blumenthal is an AIR researcher who specializes in implementation of early warning systems and developing approaches to competency-based education. 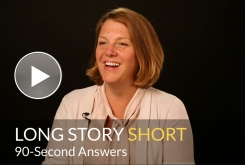 High school graduation has large financial and welfare implications for both individual students and society. In this video interview, Susan Bowles Therriault explains how early warning systems can identify students at risk of dropping out and help get them back on track to earn a high school degree.
Topic:
Education
12 Mar 2013
Brochure

The National High School Center at AIR developed an early warning systems tool that provides accurate and timely data to identify students most at risk for dropping out of high school. The center’s tool allows districts to dig deeper into their data, see patterns, and uncover the reasons behind students’ poor performance.