The Disconnect Between Minority Students and STEM Careers

A recent ACT report, The Condition of STEM 2013, offers new perspectives on the achievement gap between White and Asian students and their African-American, Hispanic, and Native American peers.

The report looks at ACT test results for the 2013 graduating class, in particular at students who said they were interested in STEM fields (science, technology, engineering and math) and the relationship between those students’ level of interest and their college readiness in math and science. Then using two interest levels – expressed interest and measured interest – it discusses the disconnect between students’ interest in studying STEM subjects and the academic success and persistence needed for STEM careers.

Not surprisingly, The Condition of STEM 2013 found that student achievement across all STEM fields was highest for those students with both expressed and measured interest in STEM:

To meet our education, economic, national security, and technological innovation goals, a stronger link must be made between students’ interest and students’ achievement in STEM. These numbers show that more must be done to capitalize on a wider pool of potentially “hidden” STEM talent.

The more striking— and distressing—results, however, are the disparities in math and science benchmark achievement among racially and ethnically diverse students with both expressed and measured interest in STEM. First the overall results: 58 percent of all students with expressed and measured interest met math benchmarks; 51 percent met science benchmarks. Results by race/ethnicity:

These gaps reveal stark inequities in achievement in subject areas deemed essential to emerging careers of the 21st century—those grounded in STEM skills and competencies—and subject areas in which students show interest.  A key finding of the ACT report:

“The academic achievement gap that exists in general for ethnically diverse students is even more pronounced among those interested in the STEM fields. With the exception of Asian students, 61 percent of whom were interested in STEM, the number of ethnic minority students (African-American, Hispanic, and Native American) interested in STEM fields is low, as are their achievement levels in math and science. Among African-American students interested in STEM, the vast majority have an expressed interest only. Among measured interest only students, Hispanic students have a greater representation than other minority groups. A real opportunity exists for a meaningful discussion with these students on what STEM careers entail in terms of educational planning and achievement.”

Where and how should these critical discussions take place? Start in the classroom. Research shows that engaging students, particularly minority students, in STEM education early in the elementary school years makes a difference in students’ achievement and their intent to major in STEM—potentially by strengthening their belief that they can succeed in math. But, the positive impact of early engagement on STEM learning and STEM interest is contingent on quality and effective teaching. Numerous reports show that effective teachers are not equitably distributed among schools, particularly those schools serving high proportions of students from low-income or minority families.

Even if exposed to good STEM instruction, and even as they gain STEM skills and competencies, many students may not be able to see themselves as a part of the STEM community. Having a well-developed science identity includes competence in science, understanding of science, and recognizing oneself as a “science person” (Carlone & Johnson, 2007). This is an interactive process— complicated and challenging for students who do not have access to teachers, mentors, and peers who look like them or who reflect practices and research relevant to their communities and lives. Even those who demonstrate STEM competence and achievement may struggle to see themselves as potential scientists if they cannot link the work of science to their lives, goals, and perceptions of who does science.

What options should we consider?  After-school and expanded-learning opportunities for students, particularly for students who have traditionally lacked access to rigorous math and science education, can help them gain the competencies and skills they need to achieve at the high levels.

Many high-quality programs provide STEM homework support, applied practice, and project-based learning activities and apprenticeships. These programs give students a better understanding of the field and promote students’ aspirations for STEM studies and careers. Two examples:

Broadening participation in STEM has taken on more meaning in the 21st century and in the midst of what has become a “national learning economy.”  STEM competencies are critical for success not only in STEM careers, but across an increasing number of career sectors and positions. We will not close the gap in STEM careers, if we also don’t close the gap in STEM interest, aspirations, and identity among all students. This work cannot be isolated within the walls of the classroom. Communities, businesses, organizations, and schools must come together to develop pools of diverse student STEM talent and interest, and deal with the inequity in the STEM career pipeline highlighted in ACT’s Conditions of STEM 2013 report.

Women with STEM Ph.D.’s are likelier to start their careers in academia, but their male peers get more of the faculty appointments at research institutions, according to a new analysis that explores the impact gender and family may have on the careers of these new graduates. 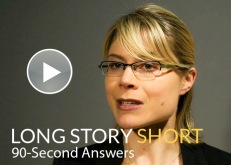 The increase in women with degrees in science, technology, engineering and math hasn't led to a similar increase in women in STEM leadership positions. In this 90-second video interview, Courtney Tanenbaum, senior researcher at AIR, explains why.
Topic:
Education, STEM