The persistent achievement gap between Black and White students has frustrated educators, parents, and policymakers for decades.

In 1973, the gap in Black-White scores on the National Assessment of Educational Progress was widest for 13-year olds in mathematics. Shrinking in the 1970s and early 80s, the difference in math scores had been cut nearly in half by 1986.  But then it began opening again. According to the most recent available NAEP data, in 2013 the overall Black/White gap for Grade 8 was 31 points in math, 26 points in reading. Black 8th graders were behind White 8th graders by roughly 3 years of schooling in math and 2 ½ years in reading.

Why does this achievement gap persist?

A recent AIR study for the National Center for Education Statistics highlighted the potentially detrimental effect of school segregation. Most troubling, the authors of School Composition and the Black-White Achievement Gap found, that achievement for Black males was lower—and the Black-White gap for males wider—in schools with the highest percentages of Black students.

Don't miss our infographic series on the Black-White Achievement Gap.

Given growing concern about public school re-segregation, AIR analyzed the relationship between school composition and achievement. Students’ socio-economic status, teachers’ qualifications, teachers’ classroom practices, and school characteristics were analyzed, along with national NAEP math scores of nearly 100,000 eighth-graders. When all these factors were accounted for, Black male achievement came out significantly lower in schools with the highest percentages of Black students.

In 2014, President Obama launched the My Brother’s Keeper initiative “to address persistent opportunity gaps faced by boys and young men of color and ensure that all young people can reach their full potential.” The aim is to have all children ready to start school, reading by Grade 3, graduating from high school prepared for college and careers, completing postsecondary education or training, and finding jobs after that.

“What we’ve understood for too long,” President Obama said in 2015, “is that some communities have consistently had the odds stacked against them. … It's true for young people of color, especially boys and young men. … By almost every measure, the life chances of the average young man of color is worse than his peers… Those opportunity gaps begin early—often at birth—and they compound over time, becoming harder and harder to bridge.”

AIR’s study findings highlight the importance of examining the patterns and practices of school segregation as we seek ways to improve the “life chances” of young men of color.

Sami Kitmitto is a principal researcher and economist at AIR specializing in quantitative analysis, program evaluation, and research using NAEP data. George Bohrnstedt is senior vice president, Emeritus, a sociologist and an AIR Institute Fellow who studies student achievement and other outcomes through analysis of NAEP data. 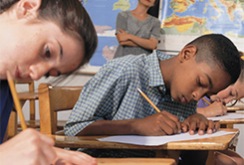 With recent concerns about the growing resegregation of schools, this analysis sheds light on the relationship between the Black-White achievement gap and the demographic makeup of schools. Accounting for factors such as socioeconomic status and other characteristics, the analysis finds that black student scores were lower, and achievement gaps wider, in mostly black schools.
Topic:
Education, NAEP
10 Oct 2015
Infographic