Delano E. Lewis Sr. served as U.S. Ambassador to the Republic of South Africa. Appointed by former President Bill Clinton, Lewis, a native Kansan, assumed his ambassadorship in Pretoria, South Africa, in 1999 and served until 2001. In September 2006, he became a senior fellow at New Mexico State University, where he established the Institute for International Relations and served as its director.

Previously, he was as an attorney with the Department of Justice and the Office of Compliance in the Equal Employment Opportunity Commission. He also was the associate director of the U.S. Peace Corps in Nigeria and country director of U.S. Peace Corps in Uganda. Lewis held executive positions at telecommunications companies and was president and CEO of National Public Radio in Washington, D.C.

Lewis has been a recipient of many awards and honorary degrees, most notably, Washingtonian of the Year in 1978, awarded by Washingtonian magazine. He has served on several boards of directors, including those of Apple, BET Networks, Colgate-Palmolive, Eastman Kodak, GEICO, Halliburton, and JP Morgan Chase.

Lewis has written two books, most recently No Condition is Permanent (self-published, 2018). 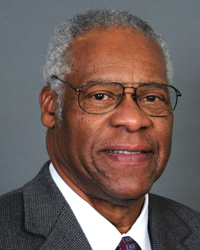