Washington, D.C. – A program at Wolf Trap Foundation for the Performing Arts that uses music, drama and dance to teach young students basic math concepts has demonstrated a significant positive effect equivalent to one to two months of learning, according to a new brief from the American Institutes for Research (AIR).

The brief builds on the results of a randomized-controlled trial of Wolf Trap’s Early Childhood STEM Learning Through the Arts program conducted by AIR in concert with the Fairfax County Public Schools in northern Virginia between 2010 and 2014.

“While there are many studies that examine arts integration in the classroom, this study may be unique in its focus on early childhood education, particularly for pre-K and kindergarten students learning math,” said Meredith Ludwig, project director of the study and a principal researcher at AIR. “Teachers in Wolf Trap’s program were more likely to use the performing arts when teaching math, and their students scored significantly higher on standardized math tests than their peers.”

Wolf Trap’s approach, known as arts integration, offers professional development to teachers of pre-K and kindergarten based on the idea that the performing arts can help children master skills across a broad range of subjects. In 2010, Wolf Trap received a grant from the U.S. Department of Education to extend this approach to science, technology, engineering and math (STEM). The project focused on the mathematics development of children.

Of the 80 pre-K and kindergarten teachers included in the AIR study, 48 participated in the two-year program and received up to 101 hours of professional development focused on linking performing arts strategies to teaching mathematics. That time included 48 hours of in-classroom residencies where they partnered with professional teaching artists—actors, puppeteers, musicians and dancers—who trained them on how to use the performing arts to teach students such basic math concepts as pattern recognition, sequencing, probability and comparisons.

The study examined 18 Fairfax schools that were randomly assigned to participate in the Wolf Trap program or continue their usual practice. The study found that the Wolf Trap program produced a statistically significant positive impact in both years of the program. The first-year impact is equivalent to 1.3 additional months of learning, or 26 additional days, for students instructed by teachers who participated in the program. The second-year impact amounts to 1.7 additional months, or 34 additional days, of learning, even though not all students in the second year continued in classrooms with teachers participating in the program.

Researchers noted that while the study had limitations—small sample size and substantial attrition of study participants—it provided “promising evidence” of the program’s positive effects on student achievement. According to the study, the pre-K and kindergarten students taught by participants of Wolf Trap’s program scored higher on the Early Math Diagnostic Assessment than their counterparts taught by non-participating teachers.

“We have seen through decades of practice and research that integrating the arts into core subjects helps young students learn better,” said Arvind Manocha, president and CEO of Wolf Trap Foundation for the Performing Arts. “These new findings from AIR show that incorporating music, movement, drama, and puppetry into early childhood education results in significant learning increases in mathematics—something that has been documented to be a key factor in improving life outcomes for young children. The arts are a powerful learning tool.”

The brief, “Arts Integration: A Promising Approach to Improving Early Learning,” and other materials related to AIR’s study of Wolf Trap’s Early STEM/Arts program can be found at www.air.org.

About Wolf Trap Foundation for the Performing Arts
Wolf Trap Foundation for the Performing Arts presents and produces a full range of performance and education programs in the Greater Washington, D.C. area, as well as nationally and internationally. Wolf Trap’s education programs include the nationally acclaimed Wolf Trap Institute for Early Learning Through the Arts, which provides innovative arts-based teaching strategies and services to early childhood teachers, caregivers, and children from birth through Kindergarten. For more information, visit education.wolftrap.org.

Research shows that integrating arts into early childhood education has great potential for improving student learning in multiple disciplines. This brief builds on the results of a randomized-controlled trial of Wolf Trap’s Early Childhood STEM Learning Through the Arts program. Findings from the study show that participation in the program yielded a significant positive effect equivalent to one to two months of learning. 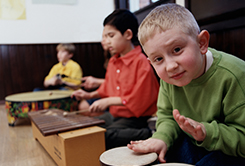 Elementary students outperform their peers in mathematics when taught by teachers using music, drama, and dance, according to a four-year evaluation of a teacher professional development program at the Wolf Trap Foundation for the Performing Arts.
Share